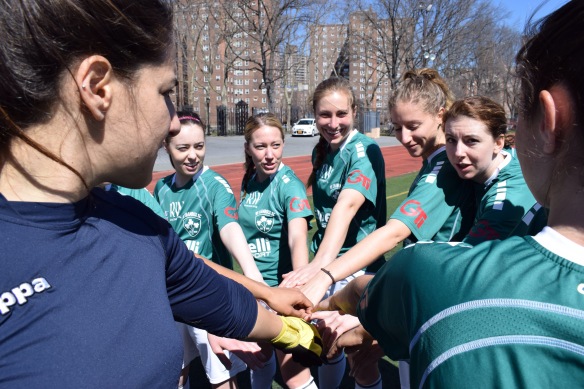 Paddy Geraghty has wisely calmed expectations ahead of the Shamrocks Women’s potential title clinching game in Manhattan on Sunday morning.

However, a win at Fuel FC will herald a historic achievement with the undefeated Rocks bidding to conquer the New York Metropolitan Women’s Soccer League Division A at the first time of trying, just one year after promotion from Division B.

The Rocks are riding high having notched their 12th win in a row last weekend, a 4-0 result over Beyond FC that pushed Geraghty’s charges through to their first ever State Cup final.

The 11am kick off at East 6th St is sure to be hotly contested as hosts Fuel have been going through their own purple patch.

“We play a much improved team on Sunday,” said Geraghty. “They have won their last four games so it’ll be a tough one. But we know a win gives us the league title so we are motivated to get the job done.”

Meanwhile, the motivation for Kevin Grogan is to keep in touch with Division 1 leaders and champions Lansdowne with just three games left in the regular season.

But the test is a severe one with the play-off chasing Greek Americans desperate for all three points (Met Oval – 8pm).

“This is another great opportunity to look at some different options for our team,” said Grogan.

“We can also give some players a well needed rest. Squad rotation is important now before our upcoming league semi-final and State Cup final.”

It was heartbreak on Wednesday night for the reserves who made the long trek to Yonkers for the State Cup semi-final only to come away with a 1-0 defeat that ended their cup ambitions.

A clinical Austie Friel goal late in the second half was the decider, leaving John Riordan’s men to focus on the league play-offs in June.

“It was very disappointing – they put everything in,” said Riordan. “I can’t fault the effort and some of the build-up play was outstanding. We just didn’t have any luck in the box and that’s all part of the game. Good luck to Lansdowne in the final.”

Sunday’s trip to the Greeks is also Riordan’s chance to rotate his squad and rest some key players given the fact that fourth spot has been secured.

“All three teams above us are equally strong,” pointed out Riordan. “It doesn’t matter who we end up playing in June. All tough prospects!”

The Shamrocks will be back at Tibbet Brook Park Sunday morning for a 9am appointment with Lansdowne – the first ever Over 30s Irish Derby.

Paddy Mc Carry’s squad managed to quickly recover from last Sunday’s cup loss by securing a hard fought 2-1 win over Manhattan Kickers, a result that confirmed their spot in the play-offs.

Wily veteran Bingo O’Drsicoll stepped up with the winner, keeping the Rocks on course for a three-peat in the league.

“We have set a goal to win all of our remaining league games so we will be going to the Bronx looking for the three points,” said Mc Carry.

“We will head up there with a very good squad. Nobody wants to lose a derby and we also still want to win the eastern division so we need those points!”

Meanwhile, the Legends head to the hallowed turf of the Met Oval for the first time for a game against Eintracht that will hopefully keep their Over 37 Division play-off hopes alive (kick-off 9.30am).

After grinding out a result against Doxa last week, Eintracht will provide another tough challenge but with two games to go, Emmett Harvey wants his side to finish as high up the table as possible.

“I know the lads are up for this,” said the player-coach who scored last Sunday.

“We have a few key players missing – Eddie Gilmartin, Eoghan Mc Partland and Donal “Ducky” Kelly – but with the return of John Riordan, Keith Buckley and Brendan Donaghue, we have the strength-in-depth to cope.”

The double header at St Michaels opens with the Women’s B team welcoming NYC United B for a 1pm kick off.

“We’ll be looking to get back on track this Sunday,” said coach Keith Perez. “With three games left in the season, we are looking to win out and that starts this Sunday at home!”

NYFC Iliria were unable to secure a home field and will play their home game against Shamrocks 1960 at St Michaels, a welcome boost for the midtable Metro 1 men who have a lengthy injury list.

“We’ve lost three more,” said Neil Mannion. “Big Robbie, Anto Carborotta, Shane Homan and possibly Robbie Kennerney. The opposition are in a promotion hunt, so the pressure is on them, much like our physio!”