Shamrocks President Sean Mc Mullan has congratulated the history making Shamrocks Women’s team who made it to the summit of New York soccer in style on Sunday!

In less than three seasons and with two more trophies still to play for, Paddy and Tricia Geraghty have steered an incredible group of players to an achievement unimaginable two years ago.

Captain Teresa Ferraro broke the deadlock with 20 minutes to go with a superb shot from 35 yards, sparking wild celebrations after the game.

“I’m very happy for the ladies who put in so much hard work since pre-season in July,” said Coach Geraghty. “It wasn’t our best performance but a quality goal from Teresa Ferraro was the difference. We’ll try and make it a league and cup double next week.”

There are still two league games left and there are also the dual ambitions of a pair of cup finals – the Division A Cup next Sunday and the State Cup on Sunday June 4, both showdowns with Rovers.

“I want to congratulate Paddy and Tricia and all the players for everything they have done for the Shamrocks,” said club president Mc Mullan.

“We are all incredibly proud and very impressed. I want to thank Teresa Brink and Erin Cullen who worked hard to get the team going and also to Keith Perez who did a great job coaching the B team this season. It’s a great day for the Rocks!”

Scoreless at half-time, Geraghty fired his talented team up and sent them out for a second half which they dominated. Fuel put up stern resistance until Ferraro’s moment of magic settled it. 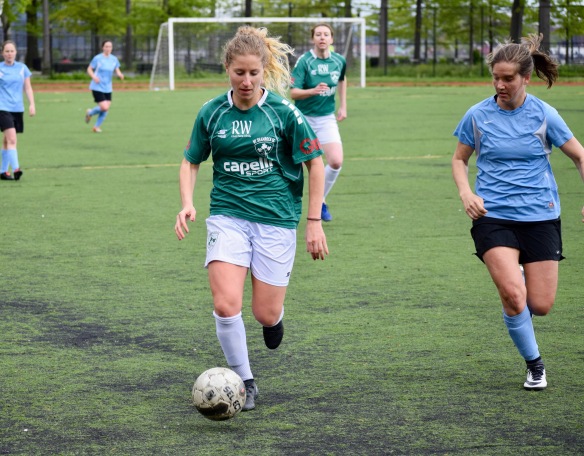 “The progress we’ve made since coming up from Division B is something to be proud of,” the goalscoring captain said.

“We’ve worked extremely hard and it’s nice to be able to celebrate what we’ve accomplished. We still have two more cup finals in the next few weeks, and we are focused on continuing our efforts and helping the club secure two more trophies.

“On behalf of the team, I want to thank Coach Paddy and the club for always supporting us. We would not be here without the entire Shamrock family!”

This first Sunday in May saw a total of two trophies added to the Shamrocks cabinet after four goals from Johnny McGeeney inspired a 7-1 win for the Over 30s at Lansdowne. 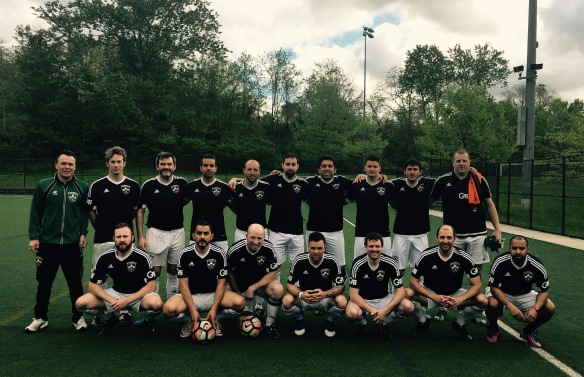 The Shamrocks Over 30s team that clinched the Eastern Conference on Sunday courtesy of a 7-1 win at Lansdowne in Tibbet Brook Park on Sunday morning.

The league holders advance to the play-offs as Eastern Conference champions and will enjoy top seeding in the final four.

Dominick McCartan opened the scoring for this visitors while Tayfun Gokmen added a pair of goals to his season’s tally.

“Johnny McGeeney was man of the match. When he plays like that, he is unstoppable. The best striker in the Over 30s Division in my opinion.

“I’m so happy for the whole squad. They have put in huge effort all year long and they deserve to be the champions. We knew we had a chance if results went our way. They went out and made sure we got those three points.

“We blew Lansdowne away in the second half. The best game we have played since the winter break. They were brilliant today.”

Elsewhere, in the final game of the day, a first half goal decided the Division 1 showdown in favor of play-off chasing Greek Americans who ground out a scrappy game against the Rocks at the Met Oval.

And it could have been 2-0 to the Greeks just before half time had they not missed a penalty on the stroke of half-time.

“It was great to get our new signing Calvin Moyes involved and also to give reserves player Darren Coleman his debut in the first team,” said Kevin Grogan.

” We also got to give Kwesi some rest. Everything now is in preparation for the semi-finals ”

Earlier, a depleted reserves team was forced into eight changes for their league game against the Greeks and they were beaten 2-0 by the top two side.

“We had 11 available players and they each gave it everything for 90 minutes. We’ll be ready come play-off time and we’re looking forward to it.”

Meanwhile, the Legends won their sixth league game in a row, a 3-0 result at Eintracht which extended their play-off hopes to next weekend’s final round of games.

The Shamrocks Legends team that beat Eintracht 3-0 at the Met Oval on Sunday.

John Riordan had the Legends a goal up after 30 minutes when he seized on a Karol Hughes assist and then Hughes himself made it 2-0 half way through the second half after a great ball across by Brian Wolohan.

Emmett Harvey rounded out the scoring with a brilliant right footed strike close to full time. Joe Connolly in goals was rarely troubled throughout the game as a magnificent defensive display nullified any threat.

“Six wins in a row and with great momentum, we can look forward to next weekend,” said assistant coach Eoin Sweeney.

“We will play with a hundred percent until the final whistle of the final game. Randall Friedman had an outstanding display at right full and Richie Brennan as usual led by example at center back with a commanding display.

“Dave Symington and John Riordan were the engine house in midfield while Emmett capped a fine display by scoring with the last kick of the game.”

At St Michaels, Dave Harvey scored a superb free kick from 26 yards to tie the Metro 1 game against Iliria midway through the first half, earning a 1-1 result for Rocks 1960.

“Ruairi Lavery once again was a rock at the back,” said Neil Mannion. “Both sides had chances to win late in the second half but a draw was probably a fair result in the end.”

Brandi Daniels and Shannon Hopkins scored two each in an impressive 4-0 win for Shamrocks B against United B.

“We put together a dominant performance,” said coach Keith Perez.

“With some new additions and formation changes, the ladies came together to out work the other team. The result puts us back in winning form and we look forward to finishing the rest of the season in similar fashion.”