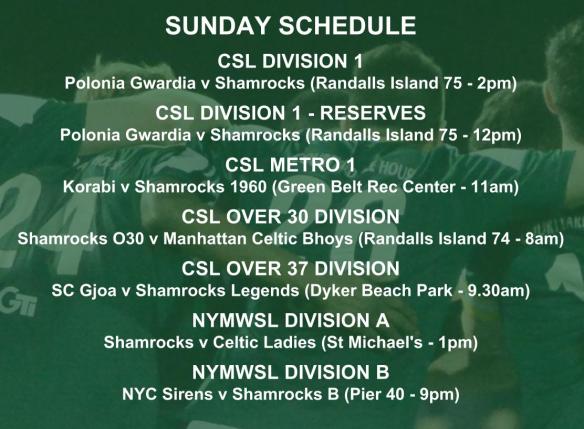 The Shamrocks first team will be aiming to bounce back this weekend when they visit CSL Division 1’s last placed Polonia at Randalls Island 75 on Sunday (kick-off 2pm).

Last week’s loss at NYAC – just the second of the season for Kevin Grogan’s men – allowed Lansdowne open up a five-point gap at the top of the standings.

And Polonia will be expected to be tough opposition having held Manhattan Celtic last weekend as they continue their struggle to survive in the top flight.

Former Ayr United and Cork City player Andy O’Connell (pictured below left) and recent Adelphi University graduate Emil Thomsen both made their debuts for the Shamrocks last Sunday and will be ready to go again this weekend.

The reverse fixture in October ended in a 3-1 win for the Rocks but coach Kevin Grogan is wary of the threat posed by the Greenpoint men.

“I’ve been very happy with the atmosphere this week in training on Tuesday and Thursday,” he pointed out.

“The players look hungry for the weekend. It’s an extremely tricky game on Sunday against Polonia. They are notoriously difficult to play against. We will tweak the formation in anticipation for their game plan.”

The reserves game will kick off at 12pm and will pit John Riordan’s men against a side that suffered a bruising 9-0 defeat back in October when the two teams met at St Michaels.

Nikle Guzijan (below left), who starred against NYAC, will miss this one as will Larry Slaughter (below right) and Brendan Lane however, a good 18-man squad is expected to keep the pressure on leaders Lansdowne. 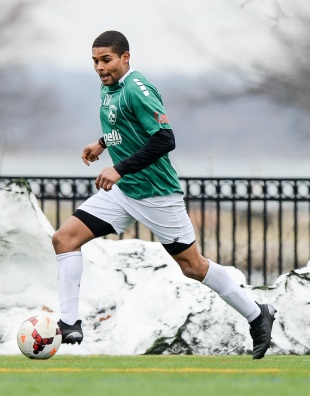 “The lads played well at NYAC and it was good to come away with a point,” said Riordan.

“Playing Polonia, we have different expectations and there is no reason why we can’t meet those. We’re missing a couple of key players but the squad is very strong nonetheless.”

Meanwhile in Metro 1, second-placed Korabi will host Shamrocks 1960 in Staten Island at the Green Belt Recreational Center (kick off 11am).

Korabi have been on an impressive streak, undefeated since the Rocks overturned them in early October. Last week, a top of the table thriller against Williamsburg ended 4-4.

“But we’re capable of beating anyone in this league, as it showed in the reverse fixture. It’s just a question of which 1960s shows up on the day.”

OVER 30s BACK IN ACTION

And in the Over 30s Division, Paddy Mc Carry’s double champions will finally kick of 2017 when they host Manhattan Celtic Bhoys at Randalls Island 74 for the early 8am kick-off.

A forfeit and a weather postponement have delayed their restart but the team is in confident mood as they face into a key month in their defense of both the league and the State Cup.

“We’re looking forward to getting back to it after a very long winter break,” said Paddy Mc Carry.

“We are in very good shape for the Spring, a really strong squad of players competing for places very high which is great for us.

“It’s all about the three points Sunday. We are missing a few but I have a very strong 18 to choose from. The boys can’t wait to get back into it. Three of the four new signings will be available for Sunday’s clash. Kevin Walsh is the only one of 4 missing.”

Elsewhere, the Shamrocks Legends will make the long trip to Dyker Beach Park to take on conference leaders Gjoa in a must-win game that will define their play-off hopes (kick off 9.30am). 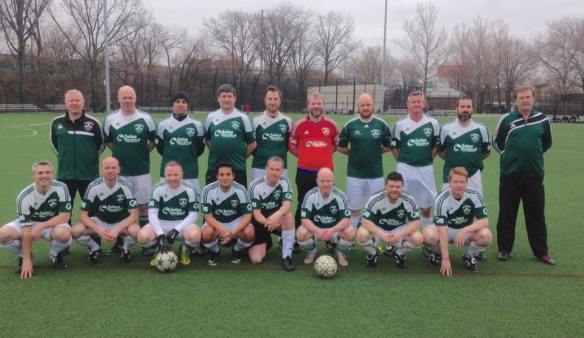 Emmett Harvey has a full squad to choose from and the Legends are coming on the back of a good win last week against CPR legends.

“This is a fixture we are looking forward to,” said player-coach Emmett Harvey.

“Although the odds are stacked against us and Gjoa are a very strong team, we will go down to Brooklyn with the belief that if we play well, then we will give Gjoa a good game.”

There will finally be a women’s soccer Irish Derby with the Division A showdown of the Rocks and Celtic Ladies at St Michael’s on Sunday (kick off 1pm).

“They are the only team to take points off us this season so we’ll be looking to improve on that result,” noted Paddy Geraghty.

“We have a strong squad to choose from so there are no excuses.”

And in Division B, last year’s title rivals NYC Sirens will welcome Shamrocks B to Pier 40 for a 9pm game.

“Although we are coming off a big win, we cannot get comfortable in our pursuit of the league leaders,” said coach Keith Perez.

“The ladies will have to come prepared to put forth their best effort, as every game is a must win from here on in.”