For over 20 years, David ‘Shevlin devoted his life to the NY Shamrocks Soccer Club. Former Rocks player Joe Behan spoke to the great man for the March 29 edition of the Irish Echo.

The popular figure beloved by everyone who played during his tenure remains a great supporter of the club and was delighted to accept the invitation from the Shamrocks Banquet Committee chairperson Aoife West.

Former Shamrocks Soccer Club President David ‘Scotty’ Shevlin, center, pictured with his fellow committee members Eltin Coleman, left, and Johner Guildea over the weekend at the New York Athletic Club’s Travers Island location. They are holding a copy of the club’s 50th Anniversary book, “The Green Side of the Apple.” Picture by Dennis Schneidler

Born in Scotland and a veteran of the Vietnam War, Shevlin, affectionately known as “Scotty,” was president of the Queens based soccer club from 1989 to 2011, showing an unprecedented dedication to the cause as they rode through good times and bad.

During his playing days, Shevlin lined out for the Yonkers Thistles, the Brooklyn Celtics and the Swedes. However, his introduction to the Shamrocks started in 1988 while watching the Mercy College soccer team play in Dobbs Ferry.

“I got to know many of the players who also played for the Shamrocks,” recalled the Shamrock Legend this past week.

“It was a joy to get to know players like Paul Woodley, Denis Frawley. Robbie Kilbane, Paul Wilson and Owen Scully among others,” he said.

“They invited me to come watch some of their games on Sundays and of course I had no idea what would end up becoming of that!”‘

Always willing to put back into the game where he could, Shevlin also coached soccer at Dobbs Ferry High School where he was a physical education teacher. 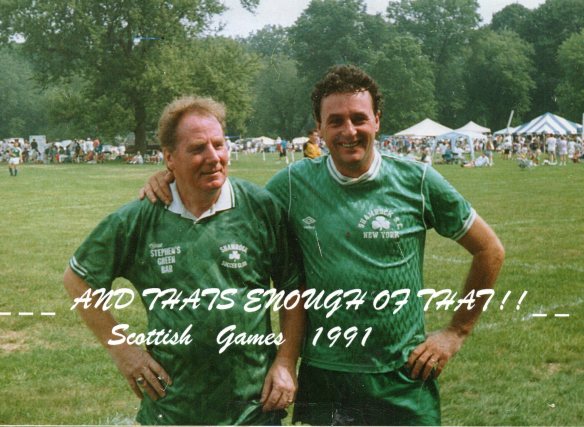 Scotty and Eltin making a guest appearance in the 1990s

It was not long before Shevlin got to know Andy Powell, Eltin Coleman and Mick Haley, soon to be friends and fellow committed club members who would guide him through the years of change to come.

“Scottie has a unique gentleness about him,” observed Haley. “His actions speak louder than his words.”

At a time when the club’s membership was as low as the morale and the number of willing players, the 1989 AGM ushered in the Shevlin era.

“I drew on my experience as a schoolteacher for many years and also as a Vietnam veteran. Discipline and organization was critical for the club to move forward,” he said.

“A big moment for me and the club was when Johner Guildea and Kevin McPartland came on board. That really helped push the club onwards,” he added. 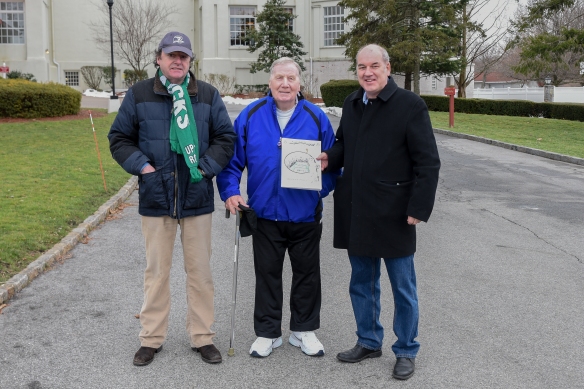 Former player and first team coach Guildea, who remains a particularly close friend of Shevlin told the Irish Echo this past week that the former president was. “Always very generous with his time and wisdom”.

It wasn’t all plain sailing during that time and tragedy struck in the spring of 2001 when the club’s former headquarters in Sunnyside, the very popular hostelry Stephen’s Green, was destroyed by fire.

“That was our home away from home,” recalled Shevlin.

“We lost playing gear, records and trophies. It forced us to move on and we were delighted and eternally thankful to the Courtyard Ale House for bringing us into the fold. That’s where the club is housed to this day,” he said.

Now happily retired, Scotty Shevlin is still heavily involved in athletics in Dobbs Ferry and keeps up with all Shamrock activities.

“We had a very memorable night in 2010 when over 350 attended the 50-Year Anniversary of the club’s foundation,” said Shevlin.

“I’m very much looking forward to seeing some old friends in June and it will be a true honor to be recognized by the current committee,” he said.

“The club is moving forward under the leadership of president Sean McMullan, head coach Kevin Grogan and all the coaches and committee members who do such great work.

“Great things are on the horizon for the club but June will also be a chance for me to commemorate all of our past members, especially our recently deceased friend Robbie Walsh.”

On the morning of the June 24 banquet, the first annual Robbie Walsh Memorial Exhibition Game will see two sets of Shamrocks Legends take each other on in what should be a very entertaining game! Location and time to be confirmed.