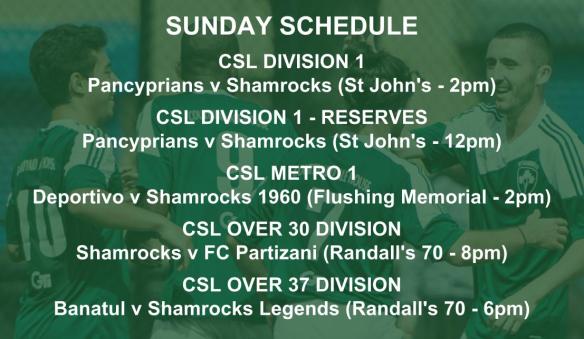 Kevin Grogan has sounded a note of caution ahead of a tough trip to take on CSL Division 1 rivals Pancyprians this coming Sunday (St John’s University, Belson Stadium – 2pm)

The Rocks gaffer warned that the league kingpins would be still smarting after their heavy defeat at St Michaels last month, a 5-2 victory which kept his team riding high at the top of the table.

A further worry is that defensive stalwart Charlie O’Loughlin will miss out due to having picked up two yellow cards during last week’s State Cup win over East Hampton. 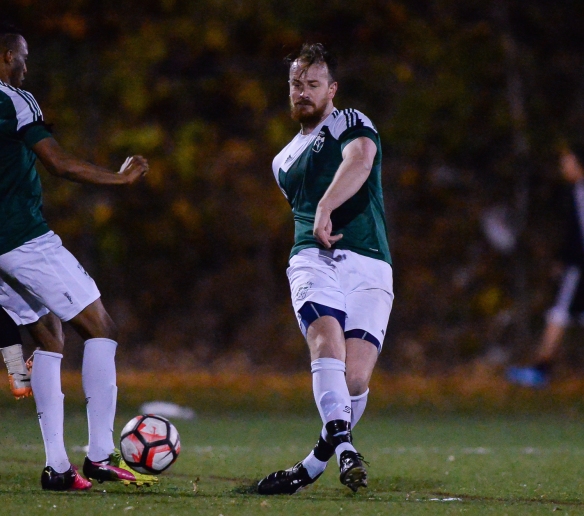 However, the addition of new signing Lerthon Theuma, who just completed a stint at Hofstra University, will provide a huge boost to the team.

This weekend will also herald the final game for our popular standout winger Jamie Clarke who will return to his native Armagh to restart his top level GAA career.

“The Pancyprians are one of – if not the – biggest clubs in the history of the league and they will be fuming that we beat them 5-2 last month,” said Grogan.

“We have gone through all the emotions this season that a team needs to go through so whatever is thrown at us on Sunday, I anticipate that we will not panic and we will stick to the game-plan that has served us very well so far this season.

“Charlie will be a massive loss to us but he will still be there on Sunday, in amongst the squad, and he will use his tremendous presence to help us try and get a result.”

In the opening game at the Queens venue, the reserves will look to make it six wins in a row when they try to replicate last month’s twin successes over the men in blue.

The Pancyprian reserves have lost five games in a row including November’s heavy league defeat to the Rocks and a subsequent State Cup reversal. But John Riordan said his team is expecting a much improved set of opponents this weekend.

“We’re a missing a few big players so I’m not exactly comfortable going into this game,” he admitted, adding that the welcome return of veteran center back Timmy Fetherston from a long injury lay-off will be a huge plus for the squad.

“It’s a great place to play football and it’s very much suited to our style of play. We need the win to keep in touch with the top three and I want us to be comfortably in play-off contention when the season starts up again.”

PARTIZANI OBSTACLE FOR OVER 30s

There will be a double header for the elders at Randalls Island on Sunday evening with the Legends and the Over 30s facing into games at 6pm and 8pm respectively.

Paddy Mc Carry’s champions take on bottom side Partizani who have only managed one win in their nine games thus far.

“We go into Sunday night’s game looking for the three points that will keep us top of the league going into winter break,” said the Donegal man.

“We did not play great last week in the cup but we still won. We will be looking for a far better performance this week, that’s for sure. After the Manhattan Celtic defeat, we talked about winning all our games leading into the winter break. If we win Sunday, we will have done that and that’s a credit to all the boys. They have put in a huge effort.”

Emmett Harvey is also targeting a win for his Legends when they go up against Banatul, also on Field 70.

“We plan to finish the first half of the season on a strong note,” he said.

“We have had some results that did not go our way so far this season but with a strong squad to choose from on Sunday, we will do our best to pick up some points. The commitment shown by all my players throughout the first half of the season has been fantastic.”

Meanwhile, Shamrocks 1960 are back in action after a couple of weekends off. They take on winless Deportivo Sociedade at Flushing Memorial Park with a 2pm kick-off.

“We’re still dealing with a few injuries so the break will come at a good time,” said assistant coach Neil Mannion.

“But we have enough quality throughout the squad to get the required result.”