Before we get into this weekend’s preview, one final reminder that today is the deadline for our first Last Rock Standing of the season.

This is a fun way of raising money for the club!

You have until 5pm ET Friday to register and pick your team for this weekend’s Premier League games.

Get involved! Up the Rocks!

State champions Shamrocks Over 30s begin their defense of the Marth Cup this weekend when they welcome Garden City to Randall’s Island on Sunday morning for a 10am kick off.

And the Donegal native has set his sights on retaining the trophy having received what he described as a “wake-up call” at home to Manhattan Celtic two weeks ago.

Mc Carry will have to plan without Jonny McGeeney, Jonny Keogh and Domnick McCartan but the squad will be at full strength otherwise.

The Over 30s pictured after their 2016 Marth Cup success. Picture: Eoin Sweeney

“We are very much looking forward to Sunday’s cup game,” said Mc Carry.

“We were delighted to win it last year and we will be doing all we can to retain it.

“The loss against Celtic two weeks ago has given us a wake-up call. All the boys are focused and they know we must bring it every game. I know very little about Garden City but we will focus on our game and we will be up for it.”

The Legends are also in Marth Cup action but must head out to Long Island early Sunday for a clash with Oceanside (Merle Ave School – 9am).

Emmett Harvey’s squad has been boosted with the addition of three Over 30s players, John Crowley, Marcus Nascimento and Tomás Maher and the player-coach is hoping to bounce back after last week’s tough 4-2 defeat at home to Gjoa.

“The State Cup is a competition that we are taking seriously and we are hoping to go on a nice run,” pointed out Harvey.

“We are going out to Oceanside with a full squad and if we play the way we know we can then we’ll see where that takes us. This will be a change for us not really knowing the opposition but we will go out there to try and win.”

Meanwhile, the first team has already advanced to the second round of the Manning Cup after Long Island Soccer League outfit Port Jefferson Fusion handed the Rocks a forfeit.

“A welcome break this weekend to regroup before a big game next week,” said Kevin Grogan, reflecting on the positives ahead of next week’s huge CSL Division 1 Irish Derby clash at Lansdowne.

The squad has encountered a multitude of injuries, none more depressing than the torn ACLs suffered by defenders Anthony Tagliaferri (pictured below left) and Tommy Manz (pictured below right). 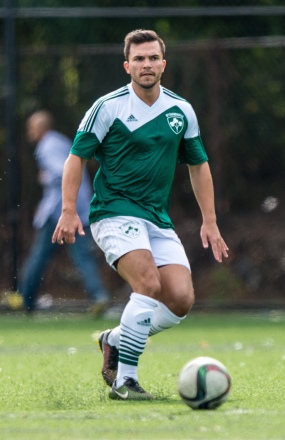 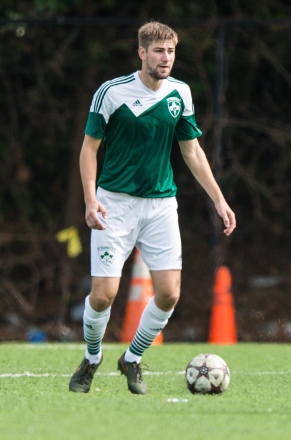 “As a club we wish Anthony and Tommy all the best,” added Grogan. “Anthony just had surgery this past week and is recovering. Unfortunately, it’s an occupational hazard. They are both still a big part of what we are doing.”

Elsewhere, in the Strumpf Cup for third and fourth division teams, Shamrocks 1960 travel to old foe Gottschee for a noon kick off at Randall’s Island 44.

Gottschee knocked the Rocks out of this competition last December after a tense penalty shoot-out brought the curtain down on a thrilling 2-2 draw.

“It’s a big game for the 1960s this Sunday,” said coach Andy Connolly.

“The Shamrocks have a long history with Gottschee, who are formidable opponents at any time. It will be nice to see how our developing squad fare in this year’s State Cup. We hope to go all the way.”

There will be a double header at St Michaels for the women’s teams who each face teams from opposite divisions.

Division A leading Shamrocks will take on lower level Astoria at 1pm buoyed by their impressive 2-0 win over league rivals Rovers last Sunday.

“We aim to continue our good form in the State Cup this week,” promised Geraghty. “It’ll be a good chance to look at some new signings and get everyone plenty of time on the field.”

And Shamrocks B face a very tough challenge from CPR Red, the only team to take points off the Rocks in Division A so far this season (St Michaels – 11am).

“The ladies have been performing well at training and they are really looking forward to getting back on the pitch after last weekend’s postponement,” said coach Keith Perez.

“It will definitely be a test for us but I expect a strong performance from our defense. Our midfield play will be key for us to come out with a victory. Being at home will definitely help and that extra support should lead to a positive result!”

The day’s action finishes late with the reserves cup clash at Randalls Island pitting the Shamrocks against the Greek Americans (kick-off 7pm).

The Greeks were 2-1 winners over the Rocks at St Michaels two weeks ago in the league but reserves boss John Riordan is looking forward to making amends for that thanks to a strengthening of the squad in the intervening period.

“The players are keen to prove themselves and build a bit of momentum for the league push too,” said Riordan.

“We didn’t get the result we deserved that night so this is a good chance to enjoy some cup football and and add to our confidence a bit more.”