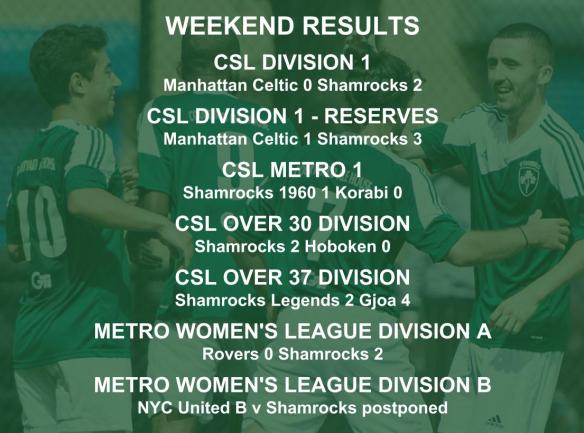 The Shamrocks enjoyed another successful Sunday, recording five wins out of six, each victory arriving in key league games ahead of this weekend’s slate of State Cup round one showdowns.

The first team moved to 5-0 and 15 points at the top of CSL Division 1 thanks to an Irish Derby success at Manhattan Celtic; the women’s team went top of Division A after their top of the table clash away to erstwhile leaders Rovers; the reserves and Over 30s rediscovered the winning feeling at a crucial time and Shamrocks 1960 gleaned all three points from their home game against top Metro 1 team Korabi.

The first division game was settled early, a strike each from Damian Lopez and captain Zachary Gosse in the first half arriving after well-executed set pieces – both players scoring their maiden goals for the club. 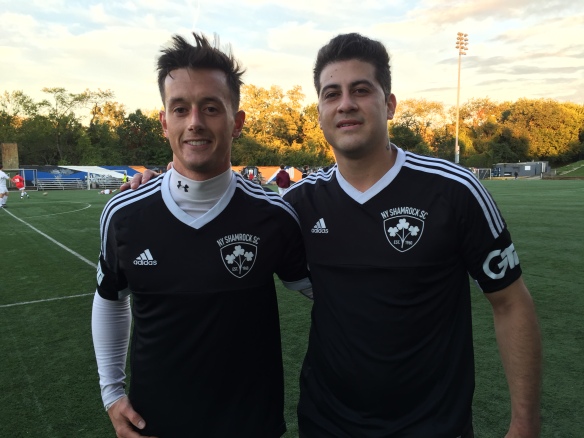 With second-placed Pancyprians winning and third-placed Lansdowne surprisingly held to a draw by newly-promoted Doxa, Kevin Grogan’s side stays five points clear at the top of Division 1

A free kick from the right by Giuseppe Barone found Charlie O’Loughlin at the back post who headed the ball back across the box to where center forward Lopez was ready to pounce with a close range effort with just five minutes on the clock.

O’Loughlin set up the second goal too, getting his head on to another set piece almost assisting Lopez for the second time, his close range header rebounding back to Gosse who headed home.

“Very satisfied with a win,” said coach Kevin Grogan whose team could well have been three goals to the good had Kwesi Mills-Odoi converted a second half penalty.

“In saying that, it was a poor game of football. On the bright side, we didn’t concede and I’m very happy with that. Satisfied to keep the run going. We are enjoying riding the wave. A nice break from the league now next week when we play Port Jefferson Fusion in the State Cup.”

The reserves got back to winning ways, meanwhile, with a superb 3-1 victory in the curtain raiser.

Alex Wasilewski put the Rocks ahead midway through the first half with a clinical finish set up by Joey Aronovsky.

The home side were let back into it during a scrappy period in the second half but the Rocks rallied back to true form and rounded out the game with well worked goals. Chris Burns’ brilliant low drive from outside the box, his third of the season, put the Rocks in front with ten minutes to go and then Sean O’Neill made sure of the points with a close range finish after a great move.

“We earned that,” said coach John Riordan. “We need to be more clinical in front of goals but we showed great character to get ourselves back into it and finally round out a game like I know we can. Hopefully some injuries clear up now and we’ll be really able to find our stride.”

Elsewhere in Metro 1, Shamrocks 1960 were 1-0 up over Korabi in St Michaels when the away side walked off the field with 15 minutes to go due to a disagreement with the referee.

Dave Harvey’s first half goal, a low drive to the bottom corner from just inside the box, was just reward for a dominant display overall, one which was inspired by returning midfielder Ciaran Moloney.

“A massive win for us,” said assistant coach Neil Mannion.

“It puts us back in the title race. When we put it all together we can beat anyone and that showed today. Former ‘Special One’ Robbie O’Neill’s presence on the sideline frustrated the opposition and led to them walking off the field.”

Earlier in the day, the Shamrocks Over 30s got back on the winning side of things with an impressive 2-0 win over Hoboken thanks to goals from Peter Hatzer and Sean Riley.

“Defensively, we were excellent and all the boys put in a real shift in very difficult conditions. It was just the response we needed after our first loss. Peter and Sean took their goals very well. Today was a real squad effort.”

In the St Michaels curtain raiser, the Legends came unstuck against Gjoa, losing 4-2 in driving rain.

Two impressive first half goals from Brendan Donoghue had the Rocks confident but a turning point arrived when the sides were level at 2-2 – man of the match Eoghan McParland was taken down in the box and Karol Hughes scored the resultant penalty. But the referee ordered it retaken and his subsequent effort rebounded back off the post.

“It was a mix of missed opportunities and a penalty hitting the post combined with silly basic errors for two of their goals. That doomed us to a tough loss. Losing Tyrone Kent with a hamstring injury early in the first half disrupted the midfield flow.

“We need to do the basics properly to advance as a team. We move on to the State Cup next week with hope and optimism and use this game as a further learning curve for our improving team.”

The fifth victory of the day was also secured early as the Division A top of the table clash between the Rocks and Rovers ended in a 2-0 win for Paddy Geraghty’s charges.

Teresa Ferraro (below left) and Erin Cullen (below right) were both on the mark, helping to send their side back to the top of the division in fine style. 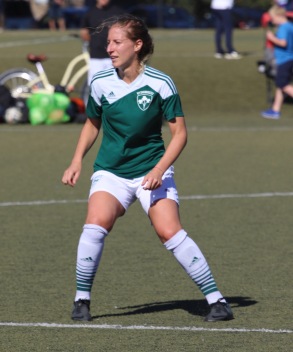 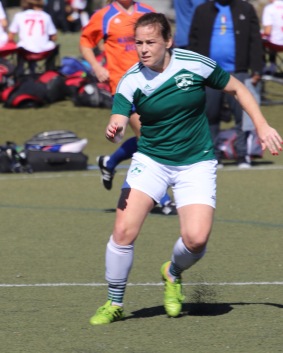 “We reacted from last week’s draw to raise it back up to the standard we expect. It was tough conditions but we battled and showed we wanted it more.”

The Division B game away to NYC United B was postponed due to rain.

All coaches are now looking ahead to next Sunday’s State Cup games which will be a nice break from the league campaigns. With three home games and four away games, it will be yet another busy day for the Rocks! 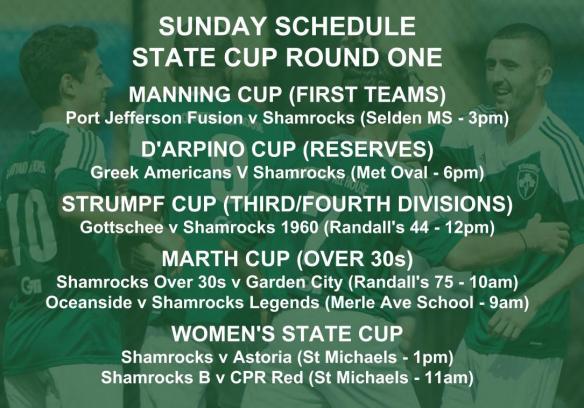