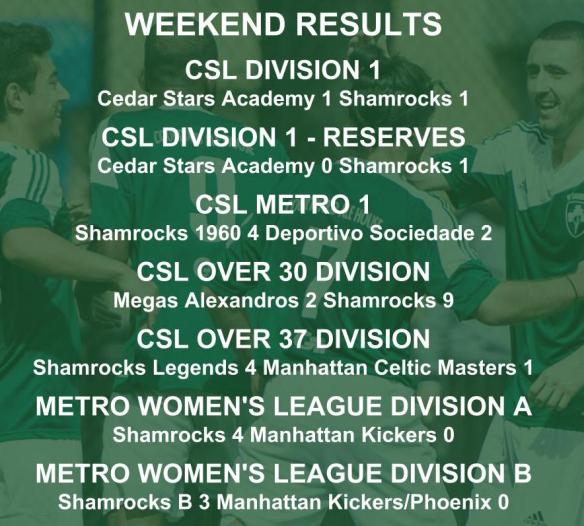 Sunday was almost the perfect day but it would be a difficult to imagine how it could have been better for the Shamrocks.

After Rocks teams rattled off six wins from six across the city, the first team headed to the Bronx for the toughest tie of the day. 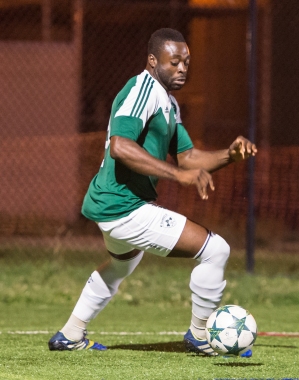 But the talented home side drew level superbly before half-time, setting up an entertaining second half where either side could have snatched all three points.

“This was a big result against one of the top two teams in the league,” pointed out Grogan afterwards.

“It was a bizarre game but the players managed it very well. Many injuries but injury management is part and parcel of the game.”

Chris Burns surged to the top of the goalscoring charts for the reserves with his second strike in two games, a late winner that handed his side a deserved 1-0 victory in the opener.

After dominating possession and peppering the CSA goal, it was the veteran defender who settled the issue after central midfielder Johnny Hayes’ volley careened back off the crossbar.

“I’m delighted with the result particularly since we were missing a couple of players through injury,” said coach John Riordan.

“We have a quick turnaround now to the replay of the game against Zum Schneider (Wednesday, Randalls 70, 9pm) and they have had a couple of very impressive results so we will need to be on our toes.” 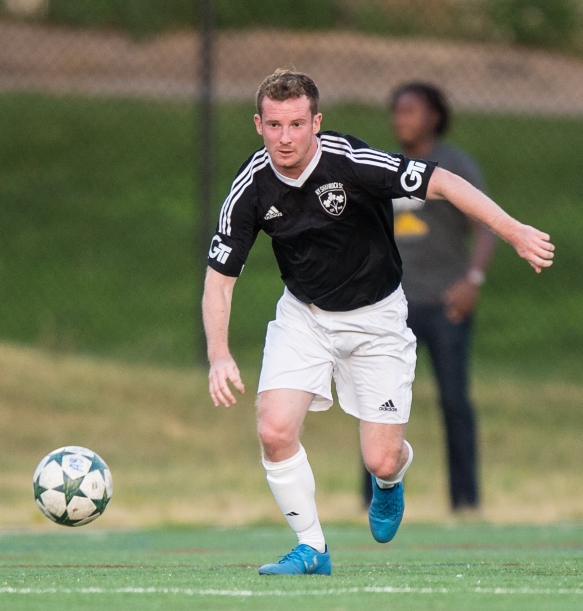 Center back Joe Kennedy helped the reserves to their second clean sheet in a row.

Meanwhile, Shamrocks 1960 got off the mark with their first win and first goals of the season thanks to a 4-2 success at home to Deportivo Sociedade.

Craig Glynn scored twice while a Dave Harvey penalty and a goal from Michael Kumaresan made sure of the points for Andy Connolly’s side against their winless opponents.

“Great win and sets us back on track,” said Connolly. “The new players are gelling with rest of the squad. Great performance from Craig and Harvey was man of the match. He’s a greater leader in his new midfield role.”

A Ger Shivnan brace helped the Legends get their season up and running, inspiring a very impressive 4-1 win at home to Manhattan Celtic in the Over 37 Division Irish Derby.

The away side took the lead but Tyrone Kent deservedly got the scoring underway for the Rocks with a good finish from the edge of the box. Shivnan’s first was a header into the far corner while his second was set up by Eoghan McParland, allowing the big Roscommon forward to fire the ball to the far corner from the edge of the box. Assistant coach Ducky Kelly scored the superb fourth, a dinking shot over the advancing keeper.

“It was great to get our first win of the season against a good side in Manhattan Celtic,” said coach Emmett Harvey.

“We played brilliantly as a team and worked hard throughout the game. Ger Shivinan, Tyrone Kent and Donal “Ducky” Kelly all took their goals superbly.

“I can’t single out any individual player for man of the match as everyone played their part brilliantly. This win takes the pressure of Eoin Sweeney once again.”

Earlier Sunday, the Over 30s hammered Megas Alexandros 9-2 and will look ahead to next Sunday’s top of the table clash against Manhattan Celtic with confidence.

Sean Riley and Johnny McGeeney both scored twice and there were also goals from Tayfun Gokmen, Shawn Baron, Dominick McCartan and the Brazilian pairing of Marcus Nascimento and Leo Coimbra.

“Three wins without a loss to start the season, we are very happy with that,” said coach Paddy Mc Carry.

“We did not start great and made a couple mistakes which resulted in their two goals but after that we settled down and we were fantastic in the second half.

“All 18 of the squad played so that was pleasing. We have attacking players who are brilliant and when they are on song, we score a lot of goals and cause teams a lot of trouble. So it was very good day at the office for us.”

In the Metropolitan Women’s Soccer League, there were excellent wins in Division A and B for both of the Rocks teams.

An early start at Randall’s Island saw Paddy Geraghty’s Division A team beat the Manhattan Kickers on a resounding scoreline, 4-0.

13 goals in three games now and Chloe Wheeler’s stunning volley set the tone. As with last Sunday’s 8-0 win, Wheeler was joined once again on the scoresheet by Georgia Frost (pictured below left), Sinéad Hennessy and Jarielle Uter (below right). 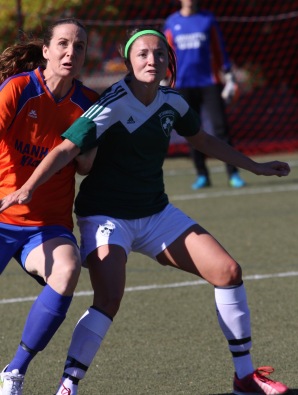 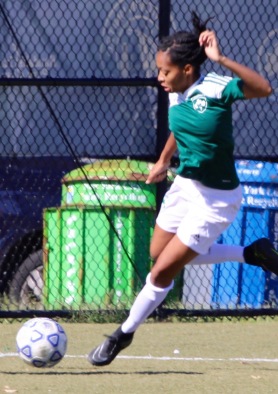 “They caused us trouble from set pieces but our fitness told in the end and we could have had six or seven. We’re coming into the tough part of our schedule in October so hopefully we stay healthy and give it our best.”

The Women’s B team enjoyed an impressive success over Manhattan Kickers/Phoenix. Anastasia Hagan’s opener was followed by a Paige Osborne double that sealed the points for Keith Perez’s charges.

“We are really coming together as a unit,” admitted Perez.

“The ladies moved as a team and implemented tactics learned at training to dominate possession the entire game. We outplayed the Manhattan Kickers at every position and I am very proud of the the performance they put together. If we continue to play at that level, this can be a very successful season.”