Just in time for the tough away trip to the Bronx to face Cedar Stars Academy this weekend, first team boss Kevin Grogan has received a huge boost this weekend with the return of defensive stalwart Charlie O’Loughlin.

The towering center back has impressed since joining the Rocks from Hoboken and will likely rejoin captain Zachary Gosse at the heart of the defense with last year’s player of the year recovering this week from the gashed shin he sustained during last week’s win at home to NYAC.

It was announced earlier this month that the former Westchester Everton Eagles would now fall under the banner of NJ-based Cedar Stars Academy subject to the terms of an initial year-long deal. The Eagles were Division 1 finalists last season and have added good talent to their already strong ranks.

“Charlie is back which is a big plus for the squad,” said Grogan.

“We will make a decision last minute on (midfielder) Giuseppe Barone (ankle) and unfortunately Eric ( Hamstring and groin ) will most likely be unfit to play.

“This will be our toughest test but we are capable of playing anyone this season. I’ve said it before, we will get better each week. Jamie Clarke came into his own during the second half last week and caused trouble. My shirt is already ironed for Sunday. I cant wait!”

Meanwhile, John Riordan has appointed first team player Joey Zorbo as his assistant coach for the reserves team ahead of Sunday’s trip to the Bronx. And in further good news for the squad, captain Paul McDaid (pictured below) returns after a weekend away as will veteran defender Nikle Guzijan and last season’s top scorer Darren Coleman. There will also be a debut for highly rated goalkeeper Jesse Corke. 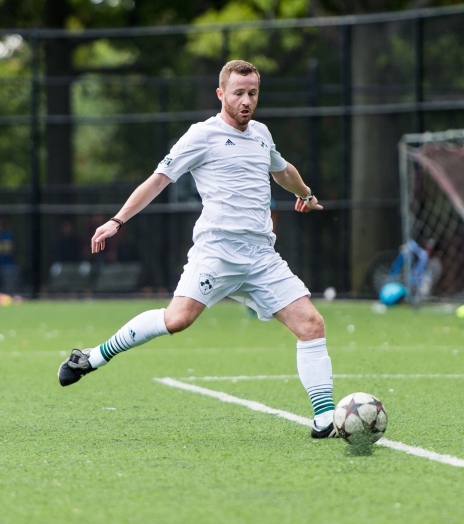 “i’m delighted Joey has accepted the role,” said Riordan. “He has been a brilliant addition to the club and he offers great energy and insight. I’m looking forward to working with him and with the mood in the camp very positive, he can be a natural fit.

“Unfortunately, Timmy Fetherston is still out with an injury and Brendan Lane has picked up a knock but we have a strong squad Sunday and we’re looking forward to it.”

It was also confirmed during the week that the CSL Arbiter overturned a referee’s decision to forfeit a league game between the Rocks reserves and their Zum Schneider counterparts on the opening day of the season. The Zum coaches did not provide roster sheets in time for the kick off and it was temporarily designated as a forfeit. However, this was reversed and the game was rescheduled to next Wednesday evening (Randalls Island 70, 9pm).

Sunday will begin with the dominant Rocks Over 30s heading to Williamsburg for an 8am game at Megas Alexandros as coach Paddy Mc Carry aims to extend the incredible unbeaten run which reached 30 games last weekend.

“We have set a goal to be top of the East division by the time the winter break rolls around. To achieve that goal, we must take care of business against Megas. Celtic are also unbeaten and we play them next week but we must get Sunday out of the way first.

“We have a full 18-man squad to chose from. There a few of the boys away but we have a lot of strength in depth this year. We also are very proud of our 30 game unbeaten streak and we want to keep adding to it!”

The Legends and Rocks 1960 will enjoy a St Michaels double header on Sunday with Deportivo Sociedade visiting for a Mtero 1 game at 1pm following the Over 37s Irish Derby between Emmett Harvey’s men and Manhattan Celtic Masters.

Deportivo have renamed from the team formerly known as Metro City Fury and, as with the Rocks, have yet to win this season, recording a scoreless drw against Croatia in their opener.

“This is D-Day for the 1960s,” admitted coach Andy Connolly. “We have to barrage the opposition with all we have on Sunday and hope to secure a beach head in this league. Should we do so, we’ll be marching under the Arc de Triomphe by Christmas.”

In the opener, the Legends will also be looking for their first points of the season as will their derby rivals, Manhattan Celtic.

“After what has been a tough start to the season, we are hoping to bounce back at home this weekend,” said coach Emmett Harvey.

“Although we are missing a few key players through injuries and suspensions, we move forward and will do our best to pick up some points this weekend.”

Elsewhere, Rocks Women coach Paddy Geraghty is aiming to make it three wins from three when his charges line out on Randalls Island 82 at 10am against Manhattan Kickers/Scala.

“We have the chance to stay top of the league so it’s a big incentive for us,” said coach Paddy Geraghty. “Two of our biggest rivals play each other this week so we have to take advantage of points dropped elsewhere.”

Later at East River Park, the B team will also face Manhattan Kickers/Scala who merged over the summer with Phoenix (3pm kick-off).

Coach Keith Perez is seeking to build on last weekend’s maiden victory and has called on his players to build momentum.

“With some new players and a strong commitment from team veterans, we will be showcasing a well balanced line up at all positions,” Perez said. “It would be a huge boost if we could get some support as we aim to pick up victory number two!”