The Shamrocks women picked up where they left off in what could prove to be a historic league campaign with a brilliant 5-0 victory over title rivals NY Skulls on Sunday.

Chloe Wheeler (pictured below left) marked her first game for the club with a stunning hat trick while a goal each from Jackie Pounder (below center) – her ninth of the season – and Brittany Meade (below right) helped guide the charges of Paddy Geraghty and Tricia Reed towards a crucial three points.

The Rocks are now five points clear at the top having only lost once all season, that defeat arriving in a previous encounter with Skulls during Week One. 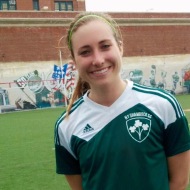 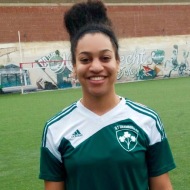 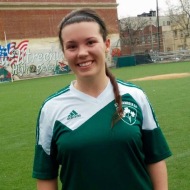 “This was our biggest game of the year and I’m very proud of how our team responded,” said Paddy Geraghty.

“I’m delighted for Chloe to start off so well with us but even she will tell you it was the players around her that made it possible for her. We’re looking forward to playing at home next week and we can be confident going into every game now.”

Meanwhile, new signing John McGuigan also enjoyed the perfect start to his Rocks career, a well executed second half goal helping his new side earn a comprehensive 4-0 win over Beyond in Randall’s Island on Sunday afternoon.

Kevin Grogan praised his side as they marched on to the quarter-finals of the League Cup at the expense of the Division 2 outfit on the back of goals from Joey Zorbo, McGuigan (pictured below right), captain Darren Freeman (below left) and Tom Manz.

“It was a good win,” said Grogan afterwards. “Four goals and a clean sheet. We showed good discipline. We tried a few different things with players and we learned a lot.”

Joey Zorbo opened the scoring early with a good finish but the Rocks really let loose in the second half. Belfast native McGuigan, who joined the club during the week, showed great movement up front and was rewarded with a great goal which he dinked over the advancing keeper.

A cracking free kick by Freeman from distance made it 3-0.

And then Tom Manz celebrated his return from injury with the fourth and final goal after brilliant work from Joey Zorbo and Mustafa Alobeidy.

Observed Grogan: “Stuart Colbert was a class act at center back today in terms of discipline and concentration and the two Zorbo brothers showed great work ethic and attitude. Darren Freeman captained us and he played like one. These are exciting times,” he added. 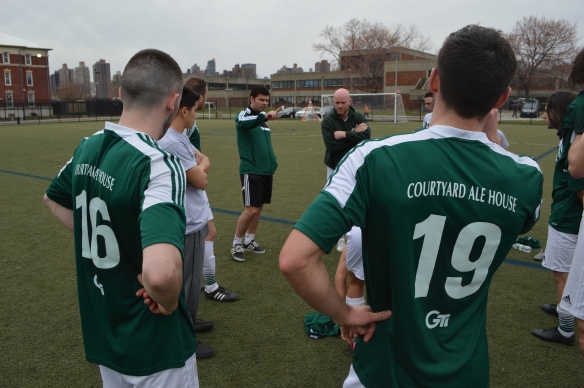 Earlier in the Over 30s Cup, the Shamrocks Legends succumbed 2-3 to the Over 30s team of Hoboken, also at Randall’s Island in a well contested game that showed good promise for the league campaign ahead.

Eoghan McParland scored in his first game for the team, an excellent finish early in the game that had the Rocks 1-0 up. At 3-1 down, Tyrone Kent rocketed home from distance but it was too little, too late. 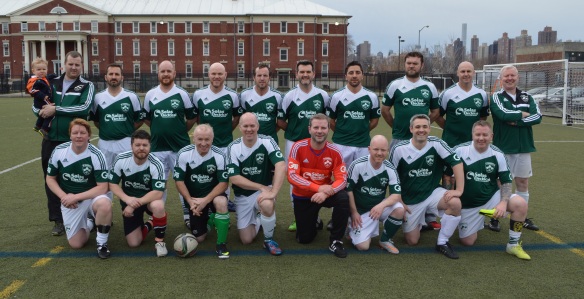 “A tough loss,” said player coach Emmett Harvey. “We scored two brilliant goals but gave away a penalty and two easy goals. It was very tight at the end and we threw everything at them for the last 20 minutes.

“Great game and great battling by everyone of my players but we just came up short in the end. We have a very strong squad and we are now focused on finishing as high up in the league as possible!”

Meanwhile in the Saunders Cup, Shamrocks 1960 were knocked out by Williamsburg International, losing 6-0 to a talented set of opponents. And in the late game, the Greek Americans were much too strong for Stevie Doyle’s reserves, putting eight past the Rocks with only Psul McDaid and Marc Vilson responding for the away side.