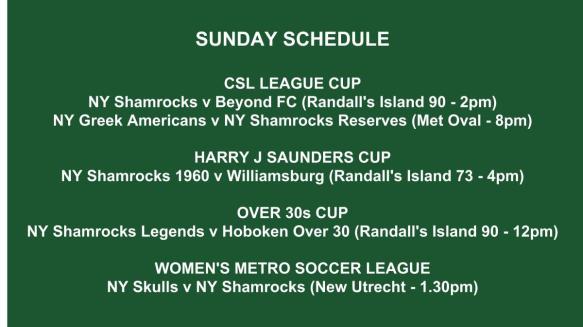 After a long three-month break from soccer, there’s a welcome return to the fray this weekend ahead of a crucial ten-week campaign that will hopefully turn out to be truly memorable 55th season of the NY Shamrocks Soccer Club.

League Cup action has four of the club’s teams back up and running on Sunday while the Shamrocks women’s team face their biggest game of the season in Brooklyn.

While all eyes will be on the triple header of cup showdowns at Randall’s Island for the first team, the Legends (2pm and 12pm respectively at Field 90) and Rocks 1960 (Field 73 at 4pm), our thoughts will be with NYWMSL Division B leading Rocks women who will be taking on fellow title challengers NY Skulls in New Utrecht at 1.30pm.

“We start with our toughest game of the season against the only team to beat us in the league so far,” pointed out women’s coach Paddy Geraghty.

“We’ve had a solid preseason and we’re ready to give it our best shot. We are still playing for two trophies so the ladies are very motivated. We’ve added Chloe Wheeler and Olivia Nadon to the squad and both have been excellent so far. We can’t wait to get started!”

As for the men, Kevin Grogan’s first team will be taking on Division 2 strugglers Beyond FC – formerly Nieuw Amsterdam – in a CSL League Cup clash that will serve as welcome preparation ahead of next weekend’s tough league game at unbeaten leaders Pancyprian Freedoms.

The Rocks warmed up with a friendly against high flying Division 2 leaders Zum Schneider on Tuesday night and have been preparing well for what is sure to be a gripping spring for the fourth-placed Rocks.

“We are delighted to be back in action this weekend after a good pre-season,” said Grogan.

“The League Cup gives us a chance to evaluate everything before we start the all important league campaign on the 20th. As always the league is our priority.”

Sunday’s curtain raiser will see a replenished Legends outfit take on the Over 30s team of Hoboken in what will be a tough workout ahead of the resumption of the league.

“We are really looking forward to the second half of the season,” said player-coach Emmett Harvey.

“We have strengthened our squad over the winter period and we have some players returning from injury. We hope to finish as high up in the league as possible. We won our last two pre-season games against CPR and Manhattan Celtic. Hopefully we can get a good result against Hoboken and go on a bit of a cup run.”

Later in the day, over on Field 73, Shamrocks 1960 will launch the defense of the Saunders Cup which the reserves won so memorably back in June.

This game will be a clash of two of the in-form Metro 2 teams as East division leaders Shamrocks 1960 take on Williamsburg who are riding high in the West.

Williamsburg have lost just once in the league and lie just a point behind leaders Gottschee who dramatically knocked the Rocks out of the State Cup in early December.

“It was a proud day winning the Saunders Cup and we are very much focused on reclaiming it for the club,” said player/assistant coach Neil Mannion.

“Naturally the league is our main aim and I’m sure it’s the same for them but both teams will benefit from the game. We enjoyed a good friendly Thursday night, beating Galicia 2-0 so the lads are looking forward to the season finally getting under way.”

With the Over 30s still involved in the State Cup, the only other game will see Stevie Doyle’s reserves head to the historic setting of the Met Oval for a late game Sunday evening away to the Greeks.

“It’ll be a tough game – they have really recovered from a tough start as expected,” said Doyle. “But this will be a good test for us and a very good workout.”