Kevin Grogan paid tribute to the one of the “best defensive performances” he has seen in years after the Shamrocks’ important 1-0 triumph over New York Athletic Club at St Michaels on Sunday.

Kevin Grogan speaks to his players after their courageous 1-0 win at St Michaels on Sunday.

In what was a truly backs-to-the-wall performance, debutant Ateba Morgan scored early to set up a nailbiting finale.

The club’s new striker hit a stunner from distance with just ten minutes elapsed to mark his first game in green in fine style.

There were chances to extend the lead but a talented NYAC side began to take control going into the second half. However they could only muster up one second half shot of the crossbar as the Rocks back line held firm brilliantly, marshaled superbly by Zach Gosee (pictured below right), Stuart Colbert (below left) and Laurie Child.

“It was an amazing win for us and a vital three points,” said Kevin Grogan.

“It was one of the best defensive performances I’ve seen in years. Our discipline and concentration from a defensive point of view was quality.

“On the ball we were way off but we can work on that. We have quality footballers we just need a bit more synergy on the ball. A great goal by our new signing Ateba and a real quality performance from Anthony Tagliaferri when he came on.”

Anthony Tagliaferri praised for his display when introduced to the fray. Picture: Dennis Schneider

The Rocks now face into a two-week break but must hope injuries clear up for center back Tom Manz – who exited in the first half with a pulled quad – and Morgan – who sustained a twisted ankle in the second half.

Earlier Sunday, there was a 6-1 win for the Over 30s against Gottschee to keep the champions and league leaders ahead of Central Park Rangers Old Boys in the title race ahead of their upcoming showdown in two weeks.

Four first half goals for Sean Riley blew the opponents away to add to Gottschee’s season woes. Riley had the Rocks up after just five minutes and he turned the screw with strikes in the 20th, 30th and 40th minutes.

Danny Parkin scored the sixth after a Gottschee own goal and then the hosts finally got on the scoresheet at the death with a penalty.

“It was a good team performance to keep us top going into the next round of the State Cup,” said pleased coach Paddy Mc Carry.

“I’m delighted to see Sean Riley starting to hit top form again for us. We have two of the top strikers in this league.”

Riley is now up to 10 for the season, one ahead of his strike partner Tayfun Gokmen who captained the team for the day.

Meanwhile, it was another dominant win for the Women’s team who enjoyed a 10-0 win over Phoenix in the Division B Cup at Randalls Island.

Goals from Sinead Hennessy (three), Jackie Pounder (two), Teresa Ferraro, Paige Osborne, Christina Beck (two) and Colleen Cavanagh made it eight wins in a row for the Shamrocks who now have a tough State Cup game against NYC Magic next Sunday at St Michaels (11am).

Pictured are two of the goal scorers, Jackie Pounder (left) and Paige Osborne.

“A great performance this week,” said coach Paddy Geraghty. “We look very dangerous going forward and we have kept two clean sheets in a row. We have a big test next week in the State Cup but we’re ready.”

Elsewhere, the Legends are back to winning ways after a 4-1 victory away to Doxa thanks to goals from Emmett Harvey, Brendan Donohue and the Angelucci brothers, Mario and Bruno.

“It was a wonderful win,” said coach Emmett Harvey. “I can’t single out any player as they all gave 100%. Every week we are playing really well and the team spirit is brilliant. We are looking forward to the next game in two weeks.”

The reserves were beaten 5-1 by their New York Athletic Club counterparts – Darren Coleman scoring a late consolation to bring his total for the season to nine.

In the late game Sunday night, Shamrocks 1960 were 6-0 winners over Metro City.

Goals from Hughie McGowan (two), Michael Kumaresan (two), Dan Meola and Braden Ruddy helped push 1960 to within a point of leaders Gotham City, their next opponents in the league.

“There is Blackpool Rock and there is Brighton Rock,” coach Andy Connolly mused cryptically. “If you bit into any part of that footballing treat on Sunday night, you’d never fail to see the indelible mark that shouted ‘Shamrocks rock’ rock.” 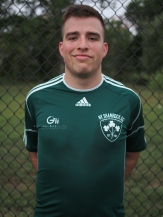