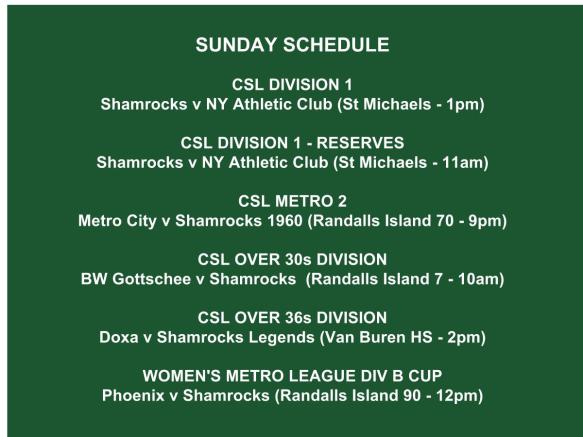 The New York Athletic Club will be the visitors to St Michael’s on Sunday afternoon as the Shamrocks look to keep pace with the top teams in Division 1 of the Cosmopolitan Soccer League.

It will be the first of a pair of crucial league games for Kevin Grogan’s men who will have the weekend off next week due to a bye in the State Cup.

This showdown with NYAC will precede the big Irish derby with Manhattan Celtic on Saturday November 21.

“We have had a good week training,” said Grogan. “We are looking forward to a massive challenge on Sunday against NYAC. It looks like we have a full 18 man squad available for Sunday which gives me a headache for selection but to succeed at this level you always need strength and depth. The subs are just as important as the starters.”

The reserves, meanwhile, are joint top of their division with Lansdowne but Stevie Doyle won’t be underestimating his players’ opponents who are just two points behind with four wins and a draw to their names.

“Last week was encouraging but we’ll have to be on our toes for this one,” said Doyle. “They’ve had some good results and we won’t have it easy at all. We’ve prepared well and we’re looking forward to it.”

The league leading Over 30s have an away game at winless BW Gottschee in Randall’s Island 7 at 10am on Sunday. The aim for Paddy Mc Carry will be to keep ahead of Central Park Rangers Old Boys who are just three points behind with a game in hand.

“We go into the game with a very strong 15 man squad and we will be looking for the three points to remain top of the table going into the state cup,” said Mc Carry. “CPR are keeping the pressure on us but if we take care of business we will remain top.”

Shamrocks 1960 coach Andy Connolly will be hoping to make it two league wins in a row when they play Metro City Fury at Randalls Island 70 on Sunday night at 9pm. The Rocks are three points behind first-placed Gotham City, their next opponents on Sunday November 22.

“Victory is intoxicating and our lads like to get drunk,” said Connolly. “So we’re hoping to taste some more of that sweet elixir of success against a formidable opposition this Sunday.”

The Legends face a tricky trip to bottom side Doxa in a 2pm kick off at Van Buren High School.

“We are going into this game full of confidence,” said coach Emmett Harvey. “Every week we are playing well but not getting the right result. The team needs a bit of consistency and if we get that we are moving in the right direction.”

The Rocks Women have completed their scheduled league games for the Fall as table toppers and will be two points clear of NYC Sirens when league games resume in the Spring. So they can now enjoy a Division B Cup game against Phoenix which takes place in Randalls Island 90 at 12pm ahead of next weekend’s State Cup game at St Michaels (11am).

“We have a tough game this week against Phoenix,” said coach Paddy Geraghty. “They will be up for it but I expect another strong performance from us. It’s a great opportunity to play in a cup semi-final if we win so we are motivated for this one.”