Huge result at home for the Rocks reserves this past weekend, clinching a vital 2-1 win over league leaders Polonia at Roosevelt Island on Saturday night.

In-form striker Dave Harvey was once again on the scoresheet with a quality first half strike from distance. The Rocks edged further ahead midway through the second half when a Glen Wrafter corner found midfielder Michael McGreevy at the back post. Polonia pulled one back in injury time but Stevie Doyle’s men held on for an invaluable three points. 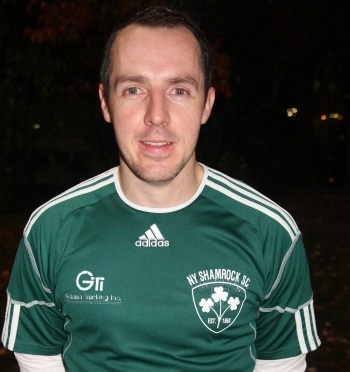 Ruairi Lavery and Neil Mannion were rock solid at the back while captain Keith Cagney put in another inspirational performance in midfield. Harry Silke was impressive in his debut up front.

“That was a great result for us and we deserved it, the way we played,” said Doyle. “We’ll look forward to the next round of the cup now with confidence and we’ll try and get one more league win before the break.”

Meanwhile, the first team remain unbeaten at the top of Division 2 after a battling 1-1 draw against Polonia.

Rocks took the lead after 20 mins when Sean Steed pounced on a loose ball in the box reacting quickest to fire home from short range after Chris Burns supplied a cross from the left.

Polonia equalised five minutes before half-time with a fine move, cutting open the Rock’s defense and supplying a fine finish.

The first team that drew 1-1 with Polonia. Picture: Eoin Sweeney

“We’re disappointed to have dropped points at home,” said coach Glen Wrafter after the game. “But very happy to keep the unbeaten streak going.”

Rocks pressed again in the second half and had more gilt-edged chances but again Clarkstown’s keeper kept the Rocks at bay. Clarkstown added a third before the Rocks finally got on the scoresheet when Scott McCullogh struck a bullet from the edge of the box into the top corner.

As Rocks went in search for a second Clarkstown added a fourth and a fifth late on. The scoreline definitely flattered the home side who had their keeper to thank for the victory.

“The finest goal-keeping performance I’ve ever seen in the over 30s league,” remarked Paddy McCarry.

The firsts and reserves team have the weekend off while the Over 30s play Barnstonworth Old Boys at 8am on Sunday at Randall’s Island Field 75 at 8am.