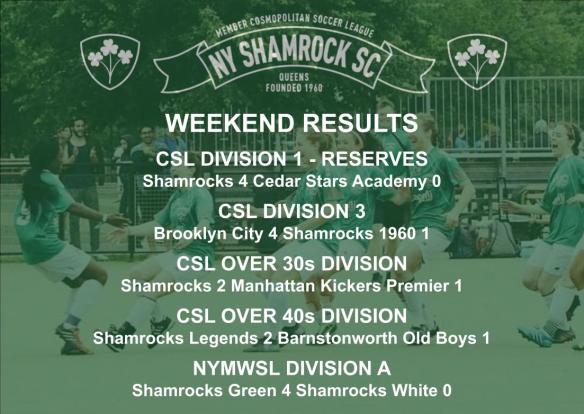 Last season’s top scorer and player of the year Mikaela Howell was also on the scoresheet alongside Chloe Wheeler in what player coach Kelci Hegg described as a “solid performance”.

“Sunday was a good day for the club!” said Hegg.

“It was satisfying to see how many players and supporters from our other club teams came to watch our match. As for the game, it was nice to see our team return to form from last year.

“The addition of Briana Hovington on the back line strengthens us immensely. We also saw quality play from newcomer, Kathryn Michaud, who finished two quality crosses. Missing from last weeks squad, Chloe Wheeler and Mikaela Howell, who scored a goal each On Sunday, put pressure on the White teams back line that we were missing previously.

“Overall, it was a solid performance from the team and a much needed win to get us back on track.”

There was also a first win of the season for the reserves who recorded a 4-0 demolition of Cedar Stars Academy at at Randall’s Island.

Joey Aronovsky, Micky McGreevy, Rob Serenbetz and James Hudson were all on the scoresheet for Kevin McPhillips‘ side.

“Delighted with the clean sheet and it’s a great result,” said KMc. “But it probably should have been seven or eight in the end. We dominated the game from start to finish so that kind of performance is the benchmark going forward.”

The Over 30s came from behind to beat Manhattan Kickers in the first game of Sunday, a 2-1 victory that was hard fought and exciting.

At 1-0 down, Sean Mc Mullan pulled off a dramatic save from a Kickers penalty, setting the platform for a tense finish. Shane Moore equalized after an impressive solo effort before Dave Finlay set up Kevin Curran for the winner on 80 minutes.

“We needed a win to get back on track and we did just that despite going down 1-0 down just before the half,” said Mc Mullan.

“We picked ourselves up and went for it in the second half and scored two great goals. Very proud of the spirit we showed!”

The Legends followed the lead of their club mates with a similarly tense 2-1 victory over Barnstonworth Rovers.

Once again, Marcus Nascimento and Ger Shivnan both found the net with sensational goals. Shivnan set up the first after 15 minutes while Paddy Geraghty lined up the Roscommon man for the winner with 15 minutes to go after Barnstonworth had leveled through a penalty.

“That was a huge win in difficult conditions,” said Riordan.

“The team is starting to show some real resolve now. We could probably have been 3-0 up so it was a little disheartening to let them back into the game like we did. But we rallied and the winner was special from Ger. We still had to see it out for about ten minutes and we showed huge desire to get all three points.”

Shamrocks 1960 lost 4-1 at Brooklyn City, their third loss of the inaugural Division 3 season.

“It was another tough loss,”

“We were tied 1–1 at half-time but the lack of bodies killed us in the second half. We finished the game with two injured players on the pitch which didn’t help. Very proud of the lads – they battled to the end. We’ll regroup this week and hopefully have a full squad for Gotham Argo on Sunday.”