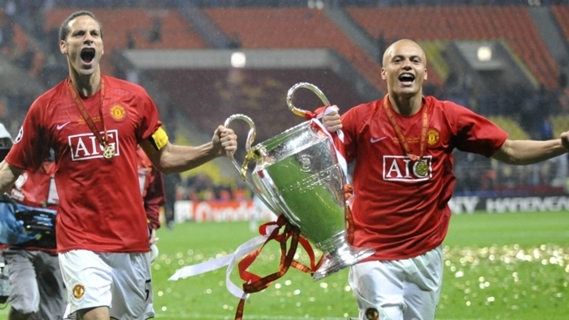 Wes Brown will line out for the Manchester United Legends XI in the Robbie Walsh Memorial Exhibition Game at Gaelic Park on Saturday June 22.

With just under 100 days to go to the biggest event in our club’s history, Brown joins Brian McClair, Keith Gillespie, Clayton Blackmore and Kleberson for the veteran Red Devils’ first ever tour to New York City where they will take on a specially assembled Shamrocks Legends selection of players.

Anto was an ever present left back on one of the best Shamrocks teams in the club’s history. Back in the day he was a Roberto Carlos figure who could bomb up and down the field for 90 minutes. He says he’s more of a “stay back and hope no one runs behind him” defender now. We passed that information on to Keith Gillespie who says he’ll be hovering around Anto all day.

Jim was a colossal goalkeeper who starred alongside Anto in the early 2000’s. He’s now a prominent activist in New Jersey and believes his time with the Shamrocks prepared him for a career dealing with dodgy politicians and their uncalled-for tantrums. Jim keeps himself in good shape which will be useful since his defense on June 22nd will have a combined age of 206.

Meanwhile, Spring action begins on Sunday with all three teams in action facing their Doxa counterparts.

It will be a special afternoon at the newly revamped Frank Principe Park where the Shamrocks Legends will be the first team of the current era taking to the new field. This is a huge development for the club and a return to what was formerly Maurice Park after over 25 seasons of soccer.

The 1pm game is an important one for John Riordan’s fifth-placed team as they bid to leapfrog fourth-ranked Doxa who currently hold the final play-off spot.

“We are very proud to be the first Shamrocks team to play at Frank Principe Park,” said Riordan. “As a club, finding space to play on is always our biggest challenge and the work put in by club president Teresa Brink and club secretary Kailey Walsh is hugely appreciated. We are aiming to start there with a win – it’s very important on a number of levels.”

Elsewhere, the firsts and reserves head to New Rochelle’s Skidelsky Field for a double header at Doxa (1pm and 3pm).

Kevin Grogan’s men are currently three points clear in third spot but are missing some key players for this one because of work commitments. The last time these two sides faced off, the game ended in a 3-1 victory for the Shamrocks in mid-September. Doxa are third from bottom in the Division 1 standings.

“It’s a tough week for us with so many missing due to work but that’s the nature of the beast,” said Grogan. “It’s a great opportunity for our squad to dig deep in what is a massive game for us.”

“The lads are excited to get back to playing competitive football again,” said coach Dan Meola. “We’ve had a tournament and some friendlies during the long layoff but nothing compares to League and Cup play. Everything that happened in the first half of the season must be forgotten. We all start with a clean slate in 2019 and no opponent should be underestimated.”