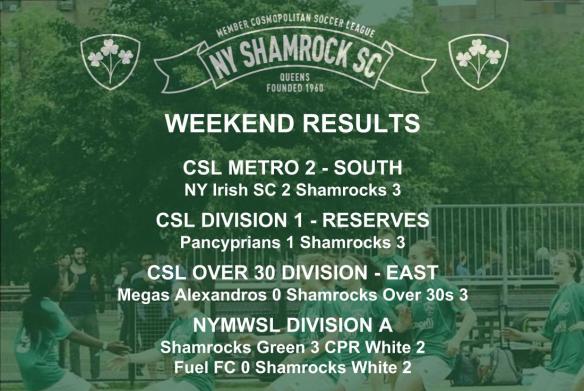 *****Last Rock Standing is back! You can join this fun English Premier League predictor game by clicking here and the first round will be next weekend*****
WEEK SEVEN REPORT
It was a perfect Sunday for the Shamrocks – five wins out of five games, all of which were significant victories as the Fall season starts to gather momentum.Shamrocks White won their first league game of the season against Fuel FC 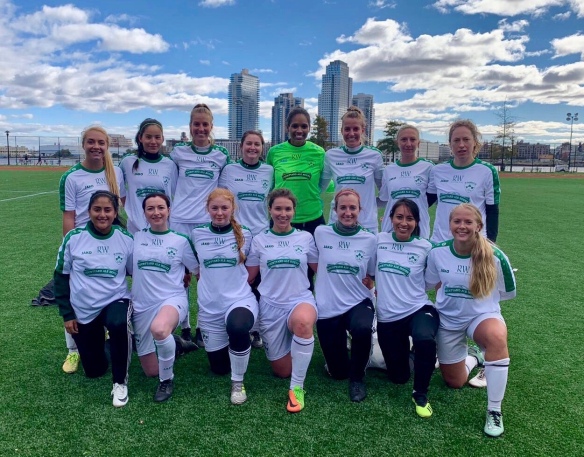 “It was a great win!” reacted captain Shannon Hopkins. “We have a bunch of new players this season so it took some time for us to learn how to play together. We played like a team today and I expect us to continue to see positive results as the season progresses.”

Even better was the comeback produced by Shamrocks Green against rivals CPR White at Randall’s Island, a 2-1 deficit converted to a 3-2 win by Paddy Geraghty’s charges.

‪Mikaela Howell scored twice and Denise Wilson notched the other with Wilson, Chole Wheeler and Georgia Frost all recording assists for the league leaders. 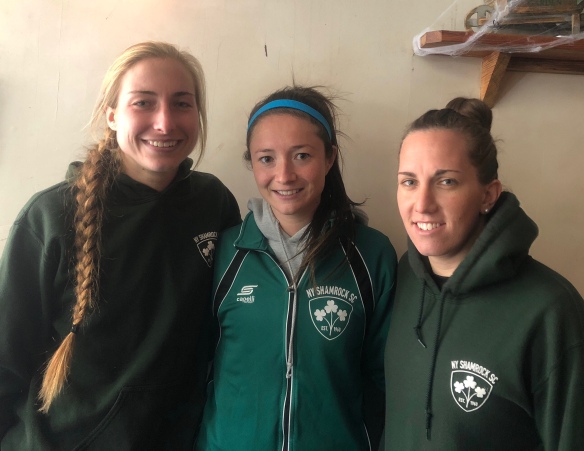 “Our best win of the season so far,” said Geraghty.

CPR are an excellent side and to come back from 2-1 down showed how far we have come from last season. We have two more league games before the winter break so we’ll start again at training tomorrow and look for another three points next Sunday”.

Meanwhile in the CSL, Shamrocks 1960 were 3-2 winners over NY Irish thanks to an early brace from Charlie O’Loughlin and a superb free kick from Ryan Redmond, his second goal of the season. 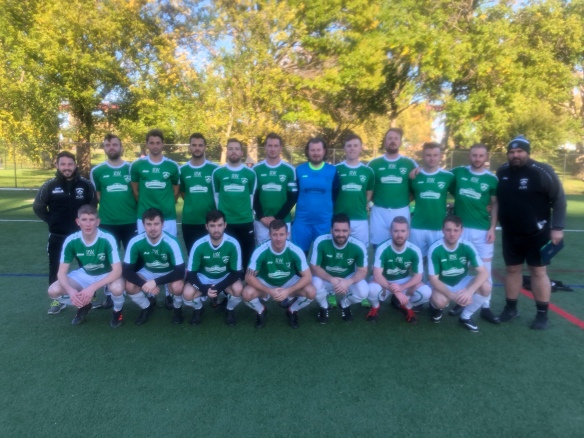 “It was a hard fought victory which gives us a nice lead at the top of the table and it also continues our winning form, seven from seven in all competitions.”

In the late game, Shamrocks Reserves eased to a 3-1 win at Belson Stadium thanks to goals from Mike Fernandes, James Hudson and Darren Coleman.

“This was our best attacking performance of the season without doubt,” said Dan Meola.

“The first 45 minutes were a joy to watch and had it not been for some superb goalkeeping, we could have found ourselves four or five up. There was more of the same in the second half but no goals to show for our dominance. We will look to improve with each week.”

In the early game, a weakened Over 30s side managed to take care of the Megas Alexandros challenge with a Seán Riley double and an own goal ensuring a 3-0 victory.

“The conditions weren’t easy for the players but very happy with the win,” said Sean Mc Mullan.

“Great to get a shut out and it’s good to be back to winning ways in the league.”