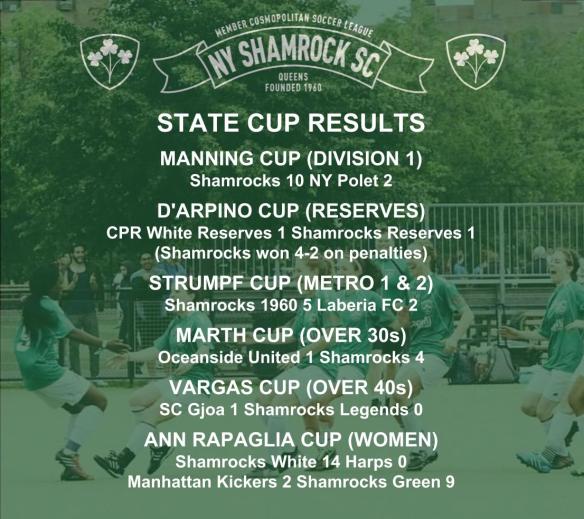 Six Shamrocks teams advanced to the second round of their State Cups after an impressive weekend which delivered 43 goals for the club and a dramatic penalty shoot out victory.

The closing game of the weekend was the most thrilling with Dan Meola’s reserves pulling out that shoot out success against CPR White in the D’Arpino Cup at Randall’s Island on Sunday evening.

Having tied 1-1, the 4-2 outcome from spot kicks served as retribution for June’s league semi-final penalties loss against the same opponents.

Andrew Scott had opened the scoring after connecting with a Nikle Guzijan cross and then the penalties were subsequently dispatched with confidence by Darren Coleman, James Whyte, John McAleenan, and Brendan Lane.

“This game was a fight from start to finish,” admitted Meola.

“We knew the quality they had in attack and did well to limit them. Our penalty takers weren’t phased. Special mention to goalkeeper Brian Bush as well. We look forward to the next round of the State Cup. This is a competition the lads and myself would really love to win, but we’re not getting ahead of ourselves.”

For once, it was the first team playing opening act for the reserves and the game was almost over as a contest after five minutes when the Rocks surged into a rapid 3-0 lead thanks to Barna Mako’s first ever goal for the club followed by a Kaba double.

Kurt Cameron scored the next two and Kaba teed up Kwesi Mills-Odoi for the sixth before Kaba rounded out his hat trick. Travis Blair scored the eighth and Joey Zorbo rounded it out with a brace (both assisted by Dan Giorgi) to make it 10-2.

“Good to win,” said Kevin Grogan. “Everyone got minutes. Back to focusing on the league campaign now.”

It was all about hat tricks for Shamrocks Green who advanced to round two of the Ann Rapaglia Cup off the back of a 9-2 victory over Manhattan Kickers at East 6th St on Sunday afternoon.

“We had a solid win with another game where our fitness told in the end,” said Geraghty.

“We’ll get back to work on Tuesday and get ready for a massive game next week.”

Meanwhile at St Michaels, Shamrocks White delivered their first win of the season in fine style as they raced to a 14-0 victory over a depleted Harps.

There were four goals from Colleen Cavanagh and Christine Perrella, a hat trick for Lillian Barreto, two for Patty Kweicinski and one for Kim Stagg.

“We put up a lot of goals against our short handed opponents,” said coach Keith Perez. “What’s important is that we really used this game to improve on fundamentals and communication that should prepare us for the remaining challenges of this season.”

On Saturday night, Shamrocks 1960 survived an early second half scare to knock newcomers Laberia out of the Strumpf Cup for Metro 1 and 2 teams at Randalls Island.

Stephen Carlin, Joey Flynn, Ryan Redmond, Amar David and Conor Doherty were all on target for Robbie O’Neill’s men as they recorded a 5-2 victory after having let Laberia back into it after half-time with their Metro 2 rivals leveling it at 2-2.

“Happy to get the win and move on to the next round,” said O’Neill. “We had an awful start to the second half but the boys kept the heads and battled back to dominate the remainder of the game.”

The Over 30s came from behind to win 4-1 away to Oceanside United thanks to goals from Seán Riley, Gene Small (2) and Mark Finn.

And the depleted Shamrocks Legends lost 1-0 at Gjoa in Brooklyn to fall at the first hurdle in the Vargas Cup.

“In some ways this was our most impressive display of the season,” said John Riordan. “We had no subs and the players gave it everything they had. We played better football and had better chances and we were out on their feet at the end of it. That sort of team spirit will really stand to us when we get back to league action in two weeks.”