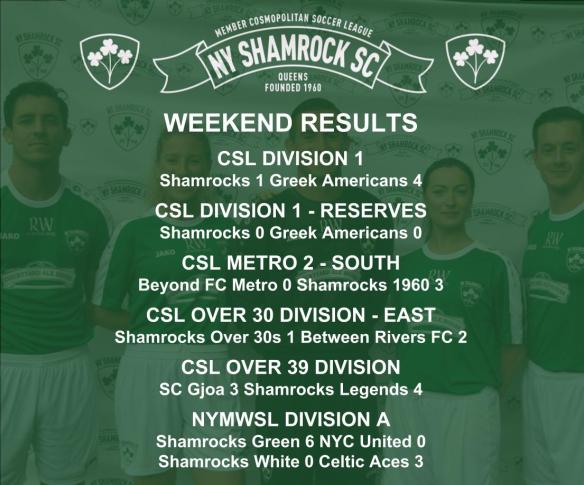 Sean Glynn, Amar Daved and Conor Doherty each scored for Shamrocks 1960 on Sunday evening at Randall’s Island to extend the team’s perfect start to their Metro 2 season.

It was yet another shut out for Robbie O’Neill’s men as they eased to a 3-0 win over Beyond FC Metro, bringing their overall goal tally to 17 without concession of a goal.

“I’m very happy with the win against a good side,” said O’Neill.

“I’m delighted with another clean sheet and three points. We’ll be looking to continue the momentum next Sunday against FC Ulqini. It was a brilliant performance from the whole squad.”

Shamrocks Green are also perfect, their 6-0 triumph over NYC United at St Michaels on Sunday morning was their third win of the season.

Mikaela Howell scored a hat trick to bring her season tally to five while there were also goals from Teresa Ferraro-Gosse, Jo Belluardo and Chloe Wheeler.

“We had a couple of injuries that we hope won’t be too serious. Of the 13 goals we’ve scored this season, 10 have come in the second half so it shows our fitness is making a difference.”

“Another tough loss for the ladies,” said coach Keith Perez. “We are improving game after game but just haven’t had things fall our way. We will look to build on the positives starting at Tuesday training.” 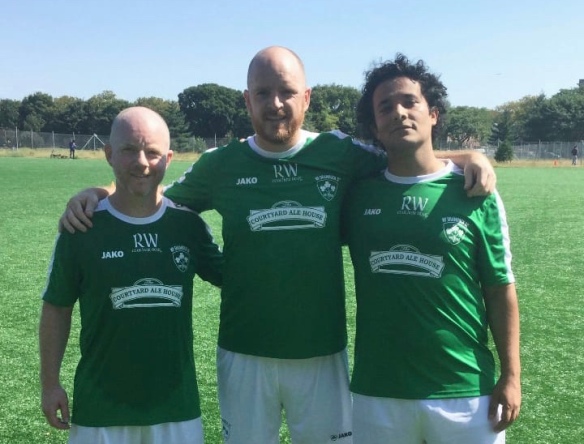 Legends goalscorers Donal ‘Ducky’ Kelly, Justin Stanford and Marcus Nascimento
pictured after helping their team to a 4-3 win on Sunday

The Rocks were 1-0 down in the first half and 3-2 down in the dying minutes but kept battling to secure a second win in a row and an unbeaten start to the season.

Justin Stanford’s clinical finish leveled the game after 30 minutes and Nascimento scored a second half penalty to make it 2-1. But Gjoa then began to enjoy a purple patch and deservedly swung the game to 3-2 in their favor.

The Shamrocks dug deep in the final ten minutes, however, and pressed their hosts. A Cris Silva corner flicked on by Nascimento was headed home from close range by Ducky Kelly who was superb throughout.

And then the introduction of veteran Eoin Sweeney to the Rocks attack completely confused Gjoa, allowing Nascimento space to run on to a John Riordan pass and push the ball past the advancing goalkeeper.

“Incredible win,” said Riordan. “We never gave up. We were missing some important players so to come away with all three points is a massive boost for our team spirit.

“The game was played in a very good spirit also. A really good advertisement for the Over 39 Division.”

There was disappointment on Saturday evening for the first team at Randall’s Island where the Greek Americans overcame Kevin Grogan’s men with a deserved 4-1 victory.

It had been a bright start for the Rocks, a well taken Dan Giorgi goal giving the home side a well earned lead after a great assist from Sam Huteson

But the Greeks responded almost immediately with a penalty scored by Charlie Ledula. Pat McCann made it 2-1 after 57 minutes with a great finish and Ledula made it 3-1 five minutes later to effectively end the game as a contest. A fourth was added in injury time.

“The honeymoon period of winning the first two games is definitely over,” said Grogan.

“We now need to regroup and go back to basics. Work ethic is always the foundation then we win the first ball, anticipate the drops, mark, track and tackle, see the danger at the back, make the ball stick up top, movement to create passing lines, move the ball in a quicker more decisive way.

“We must win the battle first in games and then we play. We need to go and get a result against Hoboken who have had a fantastic start to the season. It will be a dog fight. We need to get to bed early and be prepared.

“I’m fed up of people talking about play-offs. What a load of nonsense. We survive first and then see what happens. We need to get into survival mode. The rest will follow. The greats have a survival mechanism ingrained into them. That’s why they are great. This challenge is not for everyone.”

“This game was a war of attrition,” said Meola. “From minute one, we were behind the eight ball for reasons I’d rather not get into. We were reduced to 10 men after 15 minutes and from then on the lads played one of the most complete games I’ve seen. First to every ball, playing for each other, and working hard to earn a point against the league leaders. I’m honored to coach these lads, especially after games like this.”

Shamrocks Over 30s lost 2-1 to Between Rivers FC with yet another John McGeeney goal being the only bright spot for Sean Mc Mullan’s men.