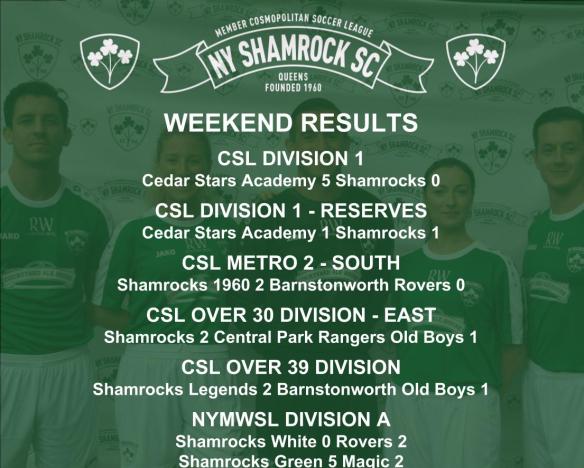 Georgia Frost was the standout player of the day on Sunday, her four goals helping Shamrocks Green roll past NY Magic on a 5-2 scoreline at East River Park.

Leslie Fajfar scored on her debut to ensure Paddy Geraghty’s team have started the league with two wins from two.

“A great win,” reacted Geraghty. “To beat the defending champions 5-2 while missing several starters and our goalkeeper took a massive effort and everyone stepped up.

“Probably the most satisfying win so far as a coach. We had quality debuts from Leslie Fajfar and Bridgette McCalla and a top performance from our midfield three with Georgia Frost scoring four goals.”

Earlier at the same venue, Shamrocks White lost 2-0 against Rovers.

“It was an unlucky result after the positive energy coming off the first game,” said coach Keith Perez. “We will be looking to bounce back from this loss.”

Meanwhile in CSL Division 1, it was also a tough day for Kevin Grogan’s first team who came out on the wrong end of a dominant 5-0 victory for Cedar Stars Academy at Ramapo College.

“We got beaten badly by a professional team but our season goals were neither achieved nor shattered,” said Grogan who will use Thursday night’s friendly against Long Island’s Irish Rovers to prepare for Saturday evening’s big game against the Greeks.

“It’s a long season. We win or we learn. On a positive note we got minutes for Steven Hutchison who is returning from a bad knee injury and we got Sam Huteson minutes too – he looks a real player. We also got Chris, Gabriel and Joey Zorbo minutes. We have an important two weeks ahead against the Greeks and Hoboken.”

There wasn’t much joy either in the reserves curtain raiser for Dan Meola for whom Darren Coleman’s penalty ultimately earned a draw after CSA’s late equalizer.

“Dominating the game and leaving with only a point was a tough pill to swallow,” said Meola.

“The lads controlled everything in the first half and should have been two up. A moment of loss in concentration allowed them to get back into the game but even from there we created the better chances. All in all, away to Cedar Stars, 9am Kickoff and only 12 men, we have a lot to be proud of. We are nowhere near our best and still difficult to beat. That bodes well for the weeks ahead.”

Both the 1960 and Over 30s teams have kept their perfect starts going.

“I’m delighted with the win,” said O’Neill. “It was a good competitive game. Special mention to Eric Doyle who pulled of some fantastic saves and also to Hughie McGowan who they had no answer for. The whole team played unbelievably well. We’re on to another tough game next Sunday evening against Beyond.”

It wasn’t easy for the Over 30s against CPR but a pair of goals for Johnny McGeeney early on in both halves ensured a valuable 2-1 win against a potential title rival.

“I was very happy to get the three points today against a very good and organized CPR team,” said assistant coach Paddy Mc Carry.

“They have three or four brilliant players and played well as a team. We were not at our full strength and we were missing a few big players. We did not play as well as we did the last two weeks but we got the three points and we are still unbeaten and have full points from three games.

“So a good day at the office – it’s a sign of a good team when you don’t play well and still get the win. The boys battled and fought for everything and got what they deserved.”

The Shamrocks Legends got their first win of the season on Sunday, a 2-1 win over Barnstonworth Old Boys at Randalls Island.

It was a come-from-behind victory which arrived courtesy of second half goals from Marcus Nascimento and Ryan Thompson.

“i couldn’t be happier with the win,” said John Riordan. “It wasn’t easy but we battled all the way to the end. We’re still getting used to each other but to be unbeaten after three games is a great start.

“Brilliant to have Ryan Thompson back and getting on the scoresheet and it was also a huge boost to have Brendan Donoghue returning as well.”