While not all Shamrock teams claimed three points from their games, the club enjoyed another successful week. The 5th Annual NY Shamrock SC Golf Outing took place on Friday, September 28th prior to last weekend’s games. The weather could not have been better for the event, and the turnout for the golf did not disappoint. Firstly, we would like to thank our main sponsors on the day. Andrew James Interiors was our Gold Sponsor, The Chelsea Bell & Brendan Donahue our Silver Sponsors and The Courtyard Ale House & Pat Burke for their continued support. Below is a list of all our sponsors who contributed to the success of the event and helped build on the strong foundation of the club.  We appreciate your support as always. Up the Rocks! 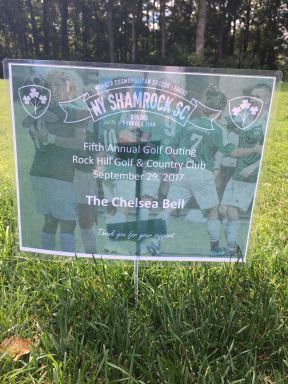 The Shamrocks First Team recorded their second home win of the season on Saturday night, with a 3-1 dispatching of Doxa at a blustery St. Michael’s. Top scorer James Whyte brought his total to six goals in four games with strikes in both halves to ensure all three points for Kevin Grogan’s men. Ned Wagner starred at center midfield with tireless running and effort to inspire the victory, while Stu Colbert was once again solid at the heart of the defense. Whyte’s opener had the Rocks a goal to the good at half-time while Wagner added the second after heading home from a Sean Reilly free kick. After Whyte scored his second of the night, Doxa narrowed the lead to 3-1 with a spot kick with a quarter of an hour remaining, but the home side were always comfortable as the minutes ticked away. “Extremely important win,” said Kevin Grogan. “Slowly, but surely, we’re looking like the team we can be.”

In the opening game of the Saturday night slate, Shamrock Reserves continued their winning streak to start the season with a 1-0 win over Doxa. The opening 30 minutes proved difficult for the Rocks, despite the away side playing a man down to open proceedings. Carving the opposing defense at will, the Rocks simply could not apply the finishing touches to a host of chances in the first half. Sean O’Neill and Paul McDaid coming closest for the home side. After the interval, a Joey Aronovsky corner kick found its way all the way to the back of the net on 60 minutes. The whip of the ball – and the wind – left the Doxa back line puzzled as the ball avoided everything to nestle in the far corner. The result never looked in doubt despite the narrow score line, with a fourth consecutive clean sheet for the Shamrock defense.

Shamrock 1960’s will have to wait another week to claim their first points in Metro Division I, after falling 3-1 to NY MetroStars at Randall’s Island. In what was an end to end game from start to finish, the Rocks failed to convert their opening chances to grab an advantage before half time. Dan Meola hitting the cross bar with a free kick, as well as flashing wide from a Hughie McGowan cross. The Rocks entered the break 1-0 down. After conceding two quick goals after half time, new Rocks signings Stevie Carlin, Kevin Curran, and Shawn Duda were instrumental in a second half comeback. Curran scored his first goal from the club with a long-range effort from nearly 25 yards out. The Rocks threw everything at MetroStars in the final 25 minutes of the game, but the home side claimed all three points.

Paddy McCarry’s Shamrock O-30’s endured a first loss of the season on Sunday, a tough 2-1 loss to a talented Manhattan Kickers side. The Rocks went one up through Dave Harvey on 25 minutes – a fantastic strike from the edge of the box to the top corner, assisted by Aidan Morton. However, it was a tale of two halves for the Rocks, as Manhattan Kickers started and finished the second 45 in the ascendency. An early goal was conceded early into the second half, and the comeback was complete when Kickers scored the winning goal with 20 minutes remaining. “We were the best side in the first half today. The Kickers are a good side, but the squad is anticipating a similar run to last year. After the first loss of the season, they went on a great winning streak. The Over-30 1st Division is extremely strong and getting stronger every year. There are very few easy games anymore.”, mentioned Coach McCarry.

The Legends ran into some unfortunate circumstances at the weekend, having to forfeit to Cozmoz FC. With the end of the summer family vacations, business trips and injuries, Emmett Harvey was not able to field enough players and could not reschedule the game.  Already a distant memory, the Legends are looking forward to their upcoming match against SC Eintracht.

The Women’s A team took on Fuel FC. Said Coach Paddy Geraghty, “We had our best performance of the year on Sunday. It was a big game for us to kick start our season.  We were much better in possession and could have scored ten if it wasn’t for their ‘keeper who had an exceptional game.  We had excellent performances from Jo Belluardo, Anna Spangler, and Chloe Wheeler, who led as a captain should.   We also got lots of minutes for Teresa Ferraro and Kailey Walsh as they continue to make their way back from injury.  We have another big game versus the league leaders on Sunday, and we’re missing five players. It will require a huge effort to get a result.”  The goal scores for the game were, Chloe Wheeler with 2, Jackie Pounder and Teresa Ferraro.

The Shamrock Women’s B team made it 4 victories from 4 games when they beat Astoria 3-0 at St. Michael’s.  Despite the comprehensive score line, this was another game that didn’t reflect how dominate the Rocks were on the day. First half goals from Shannon Hopkins, Jordyn Matthews and Sara Gomez handed the Rocks a comfortable victory on the afternoon. Said Coach Keith Perez, “While no goals came in the second half, I commend the ladies on their team play and passing – especially from the wings. We created a lot of chances and while nothing more materialized on the scoreboard, it reinforced our smart play and technique.  We hope to continue this kind of play – and our winning streak next week.”

Thank you for the support!!!