Three Shamrocks teams are on top of the league this morning thanks to well earned victories on a busy Sunday for the club.

Rocks Women captain Teresa Ferraro led by example with her eighth goal of the season and Georgia Frost scored a stylish headed winner in a hard fought 2-1 win over Metro Women’s League Division A champions CPR White in what was effectively a title decider at East River Park in Manhattan.

Paddy Geraghty’s are now eight points ahead of second placed CPR with just three games left to play and they can finish the task in two weeks after a break from league action for next Sunday’s State Cup semi-final.

“We were average today if we are honest,” admitted Geraghty.

“The positive side is we battled hard and and took our chances at the right time. We are now one win away from the league title so we will work on getting better at training and be ready for a huge State Cup semi-final next week.”

Meanwhile, the first team returned to the top of CSL Division 1 with a hard fought a 3-1 at Doxa in New Rochelle late on Sunday night.

Both teams struggled to gain a foothold in the second half and it took a surging run from center back Stuart Colbert who broke through and finished low and hard after a one-two with Andy O’Connell to regain the lead. Charlie O’Loughlin wrapped it up with a bullet header after 80 minutes, a superb Alejandro Fritz cross setting up the defender turned striker for his second goal in two games.

“Scratchy game and a scratchy performance but a win is a win,” said Kevin Grogan. “A big goal from Stu when we needed it. Lert came on and excited for us. We learn every game.”

The curtain raiser ended in a tough 2-1 loss for the reserves with Doxa scoring against the run of play at the end of both halves to deny John Riordan’s team a result. Darren Coleman finished well from a Joey Aronovsky cross to make it 1-1 but the visitors could not manage a second and Doxa’s winner arrived from a break in injury time.

“We were very unlucky,” said John Riordan. “They scored their first against the run of play and we dominated the second half. We’ll regroup for Thursday night – huge week of games coming up in the league and State Cup.”

Elsewhere, Shamrocks Over 30s are a step closer to securing a play-off semi-final after their 4-0 win at Hoboken combined with a stalemate between their closest rivals ensured Paddy Mc Carry’s men are now two points clear at the top of their conference.

Johnny Keogh, Tayfun Gokmen (free kick), Nei de Oliveira and Leo Coimbra all scored to ensure an important win ahead of next weekend’s trip to Germania in Poughkeepsie for the State Cup semi-final.

“It was a very poor first half showing by us but we got in at half-time, said a few words, made a couple of changes and ran out easy winners in the end,” said Paddy Mc Carry.

“Our man of the match was Domnick Mc Cartan at center back. With Celtic drawing, we are now top of the conference and it’s ours to lose. Happy with the win and the clean sheet. Focus now turns to the State Cup semi-final.”

At St Michaels, just ahead of his 40th birthday, club stalwart Donal ‘Ducky’ Kelly scored his third goal in three games in a thrilling 5-2 win for the Shamrocks Legends over conference rivals Manhattan Kickers.

The Shamrocks Legends team that beat Manhattan Kickers 5-2 at St Michaels on Sunday.

Ducky pounced to make it 2-0 after Marcus Nascimento’s brilliant opener in a result that blew the play-off chase wide open for Emmett Harvey’s men.

An impressive Kickers side deservedly make it 2-1 but Karol Hughes finished a close range free kick earned after a brilliant Eoghan McParland run through the center. Hughes’ excellent finish stretched the lead to three before Kickers narrowed it again but the Legends were comfortable in the end. Paddy Geraghty’s brilliant free kick in injury time pushed the home side’s goal difference up a little.

“On the back of a really good win against Gjoa, we knew going into this game against Manhattan Kickers what was at stake,” said Emmett Harvey.

“We dominated the game for the most part and we played some lovely football. Every player played their part and gave 100% and it’s hard to single out any player but Kevin Mc Partland rolled back the years and was outstanding in goals.

“We will enjoy this win and then our focus is on our next game against Doxa. Some really well taken goals by Karol Hughes, Ducky, Marcus and a beautiful free kick from Paddy Geraghty.”

In the second game at the Queens venue, Shamrocks 1960 drew 1-1 with Lansdowne in their Metro 1 Irish Derby which heralded Dubliner Shane Homan’s first goal for the club. The hosts conceded 10 minutes into the second half from a Lansdowne thunderbolt. 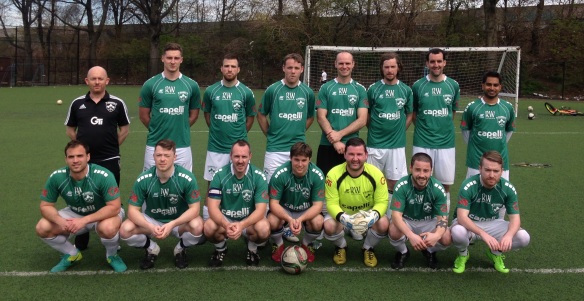 The Shamrocks 1960 team that took on Lansdowne at St Michaels on Sunday.

“We were unlucky not to snatch it at the end,” said Neil Mannion. “Credit to our man of the match Ruairi Lavery..”

In the first game of the day, Paige Osborne’s opening goal was not enough as NY Skulls came back to beat Shamrocks B 2-1. 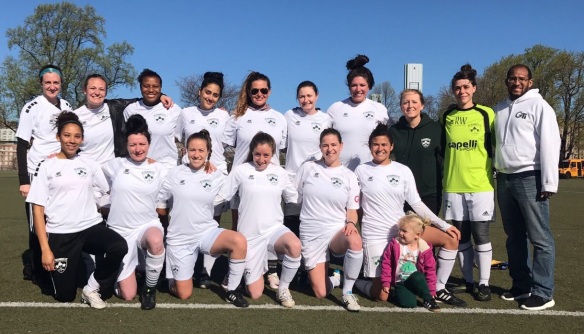 The Shamrocks Women B team that took on NY Skulls at Randalls Island on Sunday.