The NYMWSL Division A leading Shamrocks Women’s team solidified their table topping form with a big 6-0 win over Manhattan Kickers at East River Park on Sunday.

Top scorer Chloe Wheeler chipped in with a brace of goals while the other four arrived courtesy of Jo Belluardo, Jackie Pounder, Caroline Carter and Sharon Odofin.

Coach Paddy Geraghty praised the Rocks women who had gone into the game depleted and missing some key players.

“We did a good job winning tackles and closing down space,” he said.

“We needed a bit more composure on the ball and we would have created better chances. But we’re five points clear at the top now and we have a great chance to push on from here.” 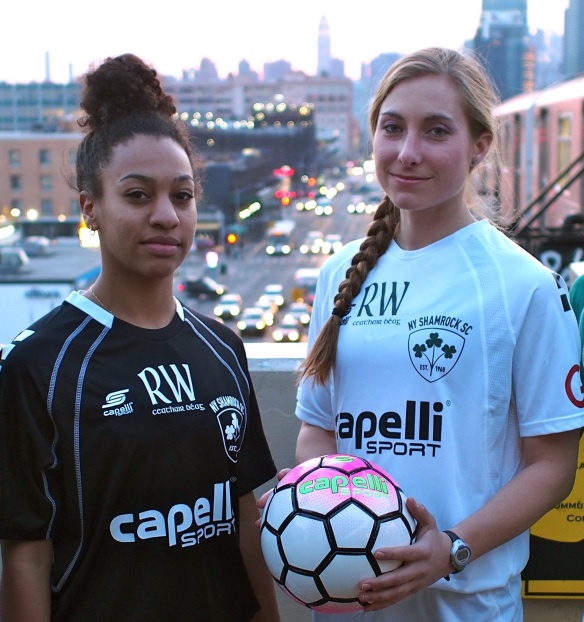 Meanwhile in Division B, Keith Perez’s charges were too strong for Manhattan Kickers / Scala / Phoenix, hammering home 11 goals without reply.

Sara Gomez’s hat trick supplemented by two goals each from Anastasia Hagan and Denise Wilson led to the impressive haul which was bolstered by Cassey Esposito, Carly Beyar, Emily Iwamoto and Paige Osborne.

“I’m really proud of the players,” said Perez. “We want to keep the pressure on Beyond and then hopefully things keep going our way.”

Earlier, in Travers Island a very impressive NYAC first team set out their stall in their bid to avoid the drop to Division 2 by coming from behind to beat Shamrocks 2-1.

Kwesi Mills-Odoi had the Rocks ahead just before half-time but NYAC leveled soon after the break. The winner was scored with 20 minutes to go.

Lansdowne’s win over Zum Schneider pushed the champions five points clear at the summit with an extra game played.

“The honeymoon period is over now,” said Kevin Grogan.

“We were average at best today. Three players tried to grab the game by the scruff of the neck but others seemed too laid back about the whole situation.

“Maybe some players are believing the hype. You’re only as good as your last game and today we were very poor. The really good players and the winners take it personally and bounce back in the next game. ”

Reserves captain Paul McDaid (below left) and Joey Aronovsky (below right) had the Rocks reserves ahead 2-0 at half-time in the curtain raiser but the hosts rallied well to grab a share of the spoils.

“At half-time, I wanted us to kick on because we knew the next goal was going to be very important,” said John Riordan.

“It wasn’t to be. They did well in the second half to make it uncomfortable for us and a draw was a fair result overall. It keeps us a point behind them and once we get rid of some unforced errors from our game, we’ll be in good shape,”

Elsewhere, the Shamrocks Legends fired six past CPR Legends to stay in the hunt for a play-off spot in the Over 37s Division.

Goals from John Riordan and Eoghan McParland gave the home side a deserved 2-0 lead at half-time and then Emmett Harvey’s men kicked on thanks to strikes from Colin Lee, Marcus Nascimento, Ducky Kelly and another from Riordan secured a deserved victory.

The Shamrocks Legends squad pictured prior to their 6-0 win over CPR Legends at St Michaels  on Sunday.

“We had a very strong squad to choose from and we opened up the floodgates,” reflected Harvey.

“A great performance and everyone of my guys played great, The commitment and the togetherness of the squad is brilliant to see.

“The return of Brian O’Connor and the addition of David Symington and Marcus has really strengthened our squad. The tone of the game was set by the brilliant John Riordan in midfield and the pace of Brendan Donahue and Eoghan McParland on the wings.

“The return and pace of Eoin Sweeney at left back caused CPR all kinds of problems and Kevin Mc Partland and Joe Connelly kept the clean sheet between them. It was a wonderful win and our focus now is against the leaders SC Gjoa on Sunday.”

In Metro 1, Shamrocks 1960 lost 3-1 against Gotham Argo. Dave Harvey had the consolation goal.