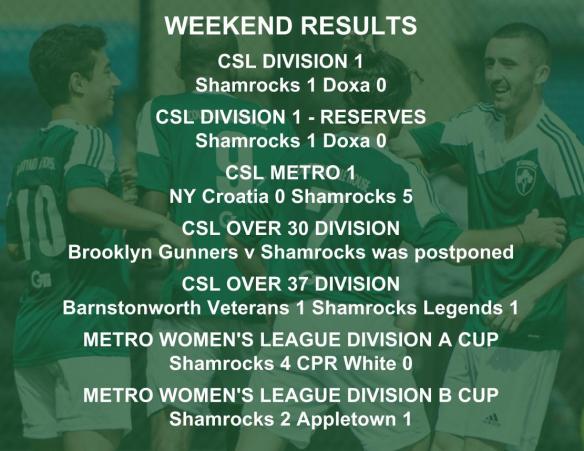 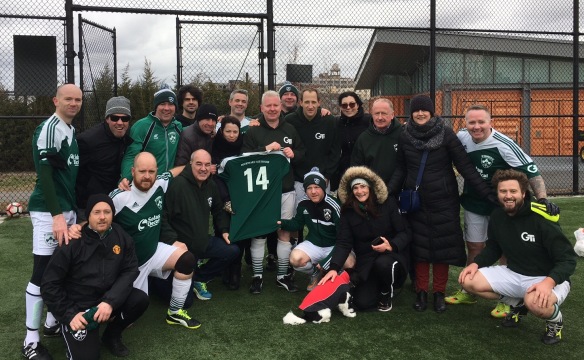 Shamrocks Legends players pictured with friends of Robbie Walsh and the retired Legends number 14 jersey at Bush Terminal Park on Sunday after a 1-1 draw away to Barnstonworth Veterans. Picture: Fiona Smyth

Five wins and a dramatic draw allowed the Shamrocks honor Robbie Walsh in perfect fashion on a weekend when his number 14 Legends jersey was worn for the last time by his good friend Eoin Sweeney.

And Sweeney wore it in style, entering the fray as an impact striker and quickly setting up Eddie Gilmartin for the all-important equalizer with 10 minutes to go against Barnstonworth Veterans at Bush Terminal Piers Park, the last field Robbie played on back at the start of October.

Sweeney’s pivoting lay-off to the edge of the box and Gilmartin’s neat finish sparked wild celebrations, before players and friends of Robbie gathered after the game to retire the 14 jersey. 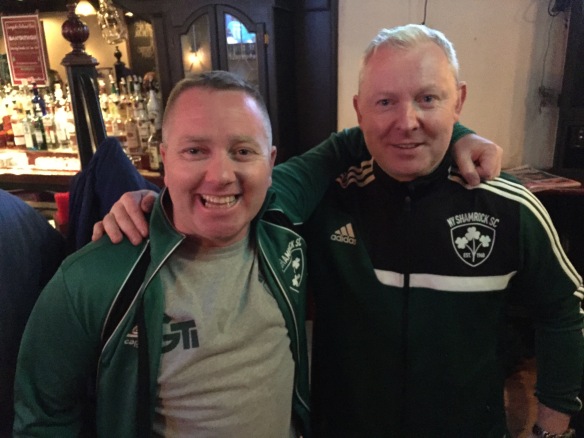 Shamrocks Legends goalscorer Eddie Gilmartin pictured left with player/assistant coach Eoin Sweeney after the pair teamed up for the equalizing goal away to Barnstonworth Veterans at Bush Terminal Park on Sunday. Sweeney wore number 14 before the jersey was retired in honor of his good friend Robbie Walsh. Picture: John Riordan

“It was a testament to Robbie Walsh’s character and legacy that on a freezing cold, windy day in Brooklyn, a large crowd turned out to pay tribute to the Shamrocks legend,” Sweeney said afterwards.

“It was fitting that the team battled back from a 1-0 deficit to earn a share of the spoils. Robbie would have been proud of our never-say-die attitude We will miss you but you will never be forgotten.”

it wasn’t just the Shamrocks club that took part in moments of silence for our former coach and captain – Cosmopolitan Soccer League president Mike Fitzgerald sent out a directive to all clubs across all divisions to stand together before their games.

“I want to pay tribute to the president and the board of the CSL for this great gesture,” said club president Sean Mc Mullan. “Our gratitude to all clubs for taking part. Robbie would have been delighted to be held in such high regard by our league.”

Kevin Grogan praised what he described as “the most important win of the season” after he watched his side record their eighth league win of the campaign at St Michaels on Saturday night.

Birthday boy Alejandro Fritz (pictured below) scored a superb header midway through the second half to pave the way for a well earned 1-0 success over a plucky Doxa outfit. 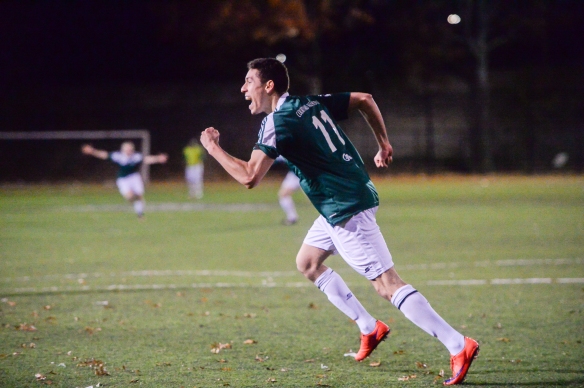 The result keeps the Rocks five points clear at the top of Division 1 although Lansdowne will play one of their two games in hand at Pancyprians on Sunday evening. 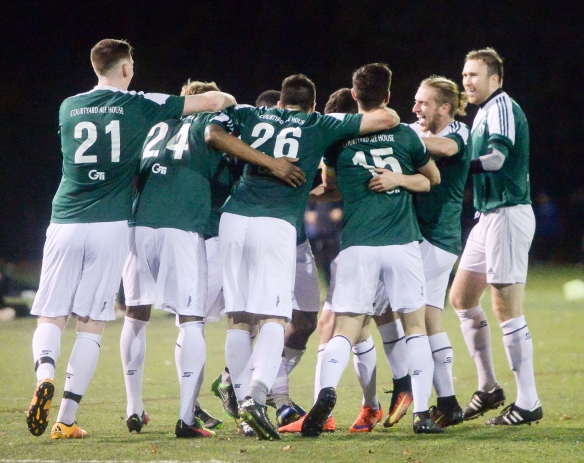 During a game played in brutal conditions, the Rocks back line kept its fifth clean sheet of the season, with goalkeeper Frankie Tsasse solid behind center backs Zachary Gosse and Charlie O’Loughlin while full backs Stu Colbert and Dan Giorgi played superbly throughout. 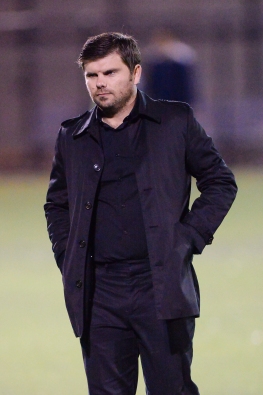 Grogan was especially pleased with the first team debut of Cónall McGrandles, the former Cliftonville player marshaling the midfield excellently in the absence of the suspended Giuseppe Barone.

“This was the most important win of the season,” the Rocks gaffer stated.

“It wasn’t the best of performances but we had the maturity and patience to score and win.

“We were delighted to get Cónall involved for the first time and we were also very happy with Ale’s goal. He produced at the right time which was a key moment of the season so far.”

Andrew Scott was the goal hero for the reserves in the curtain raiser, pouncing late for a cool headed finish to earn all three points against a talented Doxa reserves team.

John Riordan’s men had controlled most of the game but a breakthrough was a long time coming as the visitors thwarted the Rocks in a high intensity game.

This was the team’s fourth win in a row in all competitions and their fourth in five league games, consolidating their third place position behind Lansdowne and the Greek Americans. 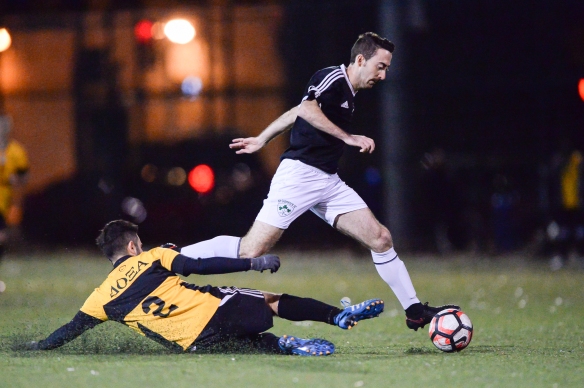 “We are really starting to click now and the lads are enjoying each game,” said the reserves boss.

“This was their toughest challenge of the season and they stood up to it. Two months ago we might have left this slip by but we were solid throughout and Andrew did very well to come in and take his chance.”

Long serving goalkeeper Robbie O’Neill kept his second clean sheet of the weekend as Rocks 1960 cruised past Metro 1 rivals Croatia, winning 5-0 on the back of a Hughie McGowan hat trick and a goal each from Larry Slaughter and Isaac Wohlsen.

O’Neill, who had lined out 24 hours previously for the reserves, was flawless again between the posts as he watched his team mates put together a display that lifted the side to fourth place. 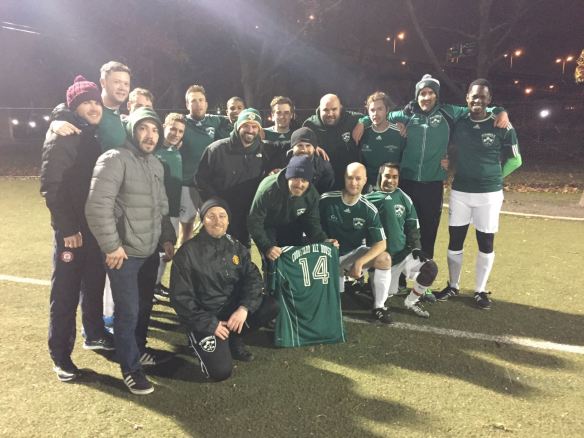 Shamrocks 1960 pictured after their 5-0 win over Croatia hold the number 14 jersey in honor of Robbie Walsh.

“The tone of our fighting spirit was set by our exemplary captain, Dave Harvey, who gave the team talk beforehand. Dave spoke with honesty and eloquence about Robbie Walsh and his influence on players and the club, emphasizing the need for our team to rediscover the kind of heart and bravery that Robbie instilled among his players.

“Dave’s exhortative remarks ran through the entire performance as the lads played one of their best games so far. We were blessed with the contributions of Stu Colbert and Larry Slaughter who helped us raise our game no end. Amidst a rousing display from all, Hughie McGowan rose to the top by scoring a hat-trick and battling throughout off the ball, marking one of the individual performances of the season. I hope this was a fitting tribute to Robbie, who we will continue to remember throughout the season.”

Earlier on Sunday, the Shamrocks Women’s teams moved on to the next rounds of their League Cups with a couple of great wins at St Michaels on Sunday afternoon.

The Division A Cup game, which ended in a 4-0 victory over CPR White, marked one year undefeated for Paddy Geraghty’s charges, a landmark which was earned on the back of goals from Chloe Wheeler (set up by Denise Wilson), Teresa Ferraro, Sharon Odofin (penalty) and Jackie Pounder.

“We were solid today and we did what was needed,” said Geraghty. “Everyone played at least 45 mins and we got to try players in different positions. We play one more game before the winter break in the State Cup so we’ll train hard until then and hopefully finish with a win.”

In the Division B Cup, meanwhile, Cassey Esposito returned from her head injury in fine style, coming on late to score the game winner in a 2-1 result over Appletown. Colleen Cavanagh had opened the scoring for Keith Perez’s team.

“Another great team effort,” noted Perez. “The players defended and moved as a team the entire game making it difficult for Appletown to get anything going. Cassey Esposito came in clutch at the end, fighting through injury to put the Rocks up. They all rallied together then to stay resilient and secure victory. We look forward to the final game of the Fall portion of the season so we can make sure we are in a position to be at the top of the table as the winter break arrives.”