The following excerpt from Chapter 10 of the Green Side of the Apple sets out exactly why Robbie Walsh meant so much to the NY Shamrock Soccer Club – both in term of its resilience during tough times and its uniquely unbeatable character during better times. This recap of the 2005/06 season charts the path to a famous Metro 2 victory that set the club back on the path to where we are today. 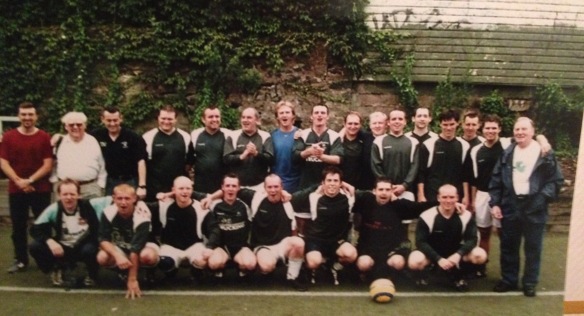 Robbie Walsh (pictured front row, second from left) guided the Shamrocks to their 2006 Metro 2 victory and back on the road to where we are now – seven teams and top of CSL Division 1. Courtesy Eoin Sweeney

Shamrock’s AGM in June 2005 was a delicate affair. The club prepared for life in Division 2 with the possibility of not having enough players to field a first 11, let along a reserves team. Robbie Walsh suggested the club’s survival was at risk He put forward a motion to drop the team to the very last division in the Cosmopolitan League, Metro 2. The drop meant going from the CSL First Division to the Third Division. The mere suggestion of this led to some club members walking out but the idea made sense to enough people to have it passed. The decision also left Walsh voted in as First Team coach. The committee was basically saying to Walsh, “if you want to drop us down, then it will be your job to bring us back up.”

The very first game of that season was an away fixture versus New York infinity. As the minibus arrived, Coach Walsh was left with the reality of the task at hand. A grand total of five players had shown up for the game. Not even half a team’s worth. There was no choice left but to forfeit. The following week was marginally better. Nine players showed up for a 6-1 thumping. It wasn’t until week three that Walsh was able to field a full team. And the result was a 1-1 tie. It was his first point as a coach. The State Cup brought some reprieve as it meant a week off from league play. It also meant an extra week to try and get things right. Once league play resumed, the rest of the teams in the division were about to find out that the Shamrocks were on the way back. A 6-2 win over New York Wanderers began an undefeated streak that lasted the rest of the season. Approaching the final game against SC Eintracht, Walsh knew a win would crown the Shamrocks as league champions.

After a tight half the score stood at 0-0. Walsh insisted at the break, “Keep pushing forward in the second half.” They didn’t disappoint. Within 10 minutes, Walsh’s warriors were in front from a spot kick. Top scorer Steve Douglas added the second minutes later and then set up the third for Matt Schnugg. The finish line was in sight. With the game all but over Walsh emptied his bench and gave final first team run-outs to Shamrock legends Sean Keogh, Joe Behan and John Guildea. And it was Guildea who set up the fourth and final goal for Douglas. The Shamrocks were Metro Division 2 Champions; the march back to the First Division had begun.

What a Round Up

It was like a round-up of the club’s 45 years of existence. They were pretty much back down in the trenches, just like at the beginning in the EDSL: playing teams like Guyana turned the clock back. It was truly back to the future, a new chapter. It was the start of a cyclical journey. Some didn’t agree with the drop, some saw it as brave, some believed the decision was ahead of its time given the world financial collapse that followed. Survival was without a doubt the main goal.

The enthusiasm was still there and it was a matter of pushing it in the right direction. Walsh knew that when he said midway through the season, “We’re getting there. All we can do is take it on the chin and keep on battling.” Jay Mwamba of the Irish Echo wrote after their first victory. “Shamrock had that old look about them last Sunday as they gutted out their first win of the season.” Kevin ‘The Maestro’ McPartland declared, “The heart is back in the Shamrocks.”

Despite the positivity, very few Irish were crossing the waters to the US. Players had to work on Sunday. As always Gaelic football for some was the priority, especially when the final was between Tyrone and Kerry. At the same time, the over 30s never let the Metro side down. The bold Billy Henderson even returned showing he had not lost his scoring touch. Vets however were not the only ones coming out of the woodwork. The inspiration Paddy Geraghty returned for the win over undefeated league leaders Guyana Juniors. Ciaran Moloney was at it again hitting a brace. Coming into the break at 2-3-3 the Shamrocks shared fourth place right behind SC Eintracht and 8 Mile Creek. Keogh’s Over 30s were winless but thumping defeats had come to a halt.

It was during the winter break festivities when Walsh, Keogh and the Shamrocks Committee went to work. They signed nine new players along with Brian Wolohan’s return from a broken ankle. Rocks were also sharpened with indoor sessions at St. Sebastian’s Community Center in Woodside. Walsh praised the Breffni Bar in Sunnyside for their support. Everything was in place and enthusiasm and hope was now a matter of taking care of business. Keogh was thrilled with the prospect of more bodies, “It frees up some players for us.” 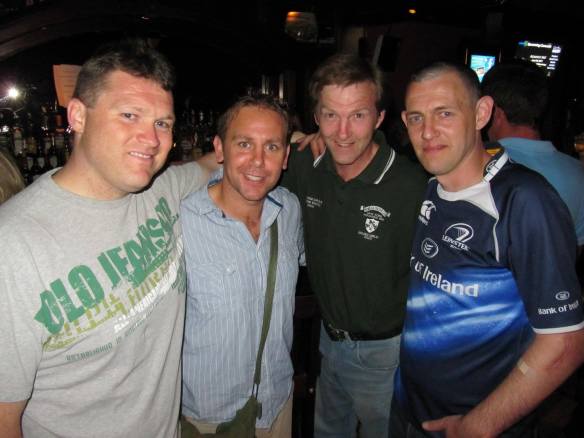 By April, Walsh’s winners were one point behind league leaders Infinity after they thumped them 5-1. “We’ll keep plugging away and take each game as it comes,” Walsh said. The coach also gave props to elder statesmen Eltin Colman and King McCormack for inspiring the younger players in the organization. Then in the quarterfinals of the D’Arpino Cup, the cramped up David Harvey’s superb goal raised the club expectations that a possible double was on the cards. The Over 30s, undaunted with league standings, eventually found their first win through a goal by whom else, McPartland. “I play anywhere the coach wants me. We may dance the River Dance again,” he said.

In May, with the return of Mike Bishop to the side Shamrock made it very clear that they wanted the title with a 10-2 demotion of Turkish outfit TAMEF, Moloney hit four. The mathematic possibility to win the league was no longer a theory. It could be done at the Met Oval against SC Eintracht in the last game of the season.

The Shamrocks’ slow climb back to the top in the Cosmopolitan Soccer League has begun. The Rocks smashed SC Eintracht 4-0 at the Metropolitan Oval to clinch the Metro Div. 2 (West) title. Shamrock’s biggest win came in their final match of the season and upped their record to 9-3-4, level with New York City Infinity All-Stars on 31 points, but better than the hitherto leaders on goal difference. “It’s a huge boost to the club,” said an ecstatic Robbie Walsh, who took over as coach a year ago with the simple goal of preventing the disintegration of a club reeling at the steady loss of players. “To win the league is a bonus,” Walsh said. “I started off trying to keep the club going.” He had, and then some. Shamrock had earned promotion to Metro Div. 1, a year after opting to regroup in the CSL’s de facto fourth division from the upper echelon.

Eintracht succumbed to a second half blitz after a goalless opening half. It started with a Paddy Geraghty penalty (51st) awarded when Stephan Douglas was upended in the box. Before Geraghty slotted home, tempers boiled over between David Harvey and an Eintracht defender, and it took Emmett Harvey to tug his kid brother away. Shamrocks then blew Eintracht away. Donal ‘Ducky’ Kelly set up Douglas for number two on the hour and six minutes later, the livewire forward completed his brace from the spot after Ciaran Moloney was fouled. By the time Moloney finished off a Matt Schmugg cross for his 15th goal of the season, Walsh had already entered the fray along with the fellow vets John Guildea, Joe Behan and Peter Lengyel, leaving Ronan Creaney in charge on the bench. 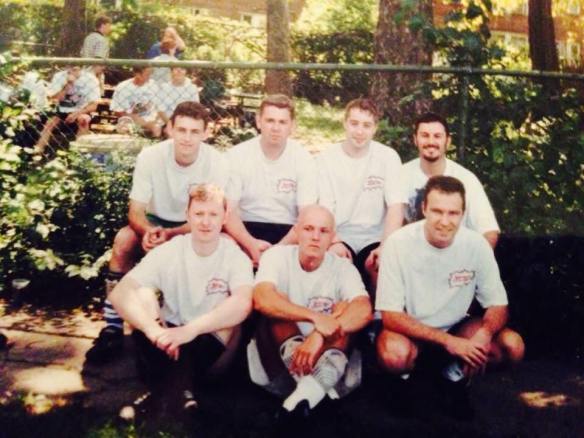 Walsh effusively doled out kudos to the club officials and supporters for the Rocks’ success. The Kildare native thanked club president Scotty Shevlin, 1960s stalwart King McCormack, Sean Keogh and his wife Nanette; the Breffni bar and other Sunnyside establishments, McGuinness and Gaslight; Steve Doran’s GTI trucking and haulage company and even team bus drive Johnny B. “Eltin Colman, John Guildea, and Joe Behan, they all gave me a lot of help,” Walsh added. He didn’t forget the players: “I’ve got a great bunch of guys,” said the proud coach.