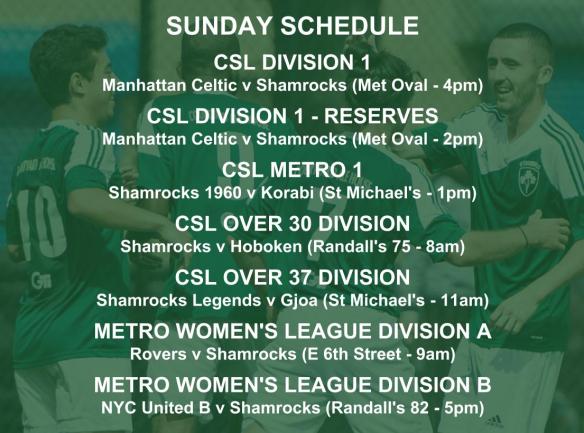 The CSL Division 1 leaders will make the short journey to the Met Oval on Sunday for what should be a tense and tough Irish Derby against Manhattan Celtic (4pm kick-off).

Shamrocks captain Zachary Gosse will return to the fray after missing last weekend’s 1-0 win against the Greek Americans while Jamie Clarke is also back available after serving a one-game suspension for the two yellow cards picked up against Cedar Stars.

Gosse said that his team mates have not let their strong start to the season cause them to get carried away, each of the players following the ‘one game at a time’ mantra of their coach, Kevin Grogan.

“It’s a great feeling getting 12 points from four matches,” admitted Gosse. “However, it’s a long grueling season that requires everyone from the club to maintain our focus and desire to win. 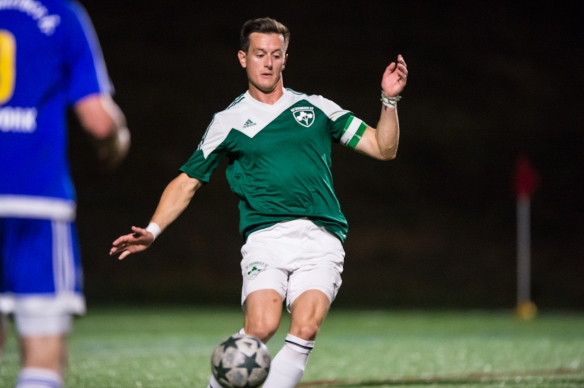 “The league format has us playing each team twice this year so it’s important not to get too high after a win, because we’ll eventually see the same team again before the end of the season.”

Mid-table Manhattan Celtic won their opener against Polonia Gwardia before pushing champions Lansdowne hard in a 1-0 defeat. They arrive into this showdown off the back of a highly impressive 1-1 draw at home to Pancyprian Freedoms.

“It should be a great atmosphere!” Gosse added. “The Met Oval is not only a beautiful, but historic venue for soccer in the United States. I spent three seasons playing PDL for the Brooklyn Knights, so it’s a bit of a homecoming for me.”

Grogan is also hoping that Laurie Child will be back available while Micky McGreevy returned to training this past week. However, injuries to Tom Manz and Rafa Carpes are a cause for concern.

“Derby games carry a bit more emotion,” said Grogan. “But ultimately we need to detach ourselves from emotion and focus on the game and not the occasion. 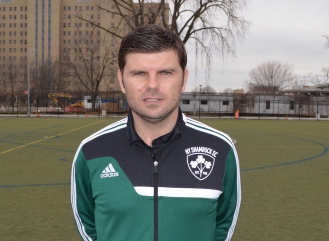 “We very much respect Manhattan Celtic and what they have achieved. Win, tie or lose we will shake hands after the game and wish them the best for the future.”

The Shamrocks Reserves, meanwhile, have a lengthy injury list which will once again leave them short handed in defense.

Timmy Fetherston, Joe Kennedy, and Sean Steed are all major doubts while work and family commitments will mean coach John Riordan will be without the services of Nikle Guzijan, Mitchell Jones, Mike Stone and Leo Nizzi.

On the plus side, Johnny Hayes, Brendan Lane and Larry Slaughter are all back available for the 2pm game against a team that has won one and lost two of their games so far.

“We’re looking forward to the game,” said Riordan. “Celtic always play good football so it will be a great test of our lads. We’re not making any excuses about the two defeats we’ve suffered over the last ten days and we’re just focusing on getting back to winning ways.”

This weekend’s double header at St Michaels will see a match-up of Shamrocks 1960 and Korabi in Metro 1 action at 1pm along with the Legends’ clash with Gjoa at 11am.

Emmett Harvey has called on the Over 37s to capitalize on a good run of form for the earlier game as high-flying Gjoa have enjoyed a good start to the season with three wins and one loss.

“After two really good wins in a row we hope to carry the momentum into Sunday’s game,” said Harvey.

“Although we are still missing a few players through injury, we have a few key players returning. We are playing some good football lately and the most important thing is everyone is really enjoying it.”

Rocks 1960 will face a tough challenge from Korabi who won each of their September games but suffered a tough loss against Lansdowne last Sunday.

“We’re confident now after getting two wins under our belt,” said assistant coach Neil Mannion. “Korabi are a top team in this division so we are fully aware of the challenge but if we click, we can present problems to any team.”

Elsewhere, Paddy Mc Carry is hopeful that the Over 30s can bounce back from last week’s defeat at home to conference leaders Manhattan Celtic when they take on Hoboken at Randall’s Island 75 at 8am on Sunday morning.

“Sunday’s game is a big one for us,” admitted Mc Carry. “Last week we did not play well and were missing quite a few starters and Celtic ran out worthy winners in the end. Players will have have to step up to the plate Sunday because we are missing quite a few with the long weekend. This is their chance to impress.

“We will be without our star striker Tayfun Gokmen for a while. He took a serve hit on Sunday to his knee. That’s a massive blow for us as he is one of the best players in the league. We wish him a speedy recovery. We are though boosted by the return of Sean Riley, Pablo Graham and Jonny Keogh.”

In the Metropolitan Women’s Soccer League, there will be an intriguing battle of the top two teams at East 6th St where second placed Shamrocks face off against leaders Rovers at 9am.

Paddy Geraghty’s charges slipped up last Sunday against last-placed CPR Reds, conceding a late goal to share the spoils, so this weekend he is hoping for a positive response from his players.

“Rovers have some quality players but we had a good session on Tuesday and we’ll be ready to go,” noted Geraghty. “We’re missing a few players this week but still have a solid squad of 14 so we expect a very good performance.”

Later at Randalls Island 82, Shamrocks B face a late afternoon showdown away to joint-leaders NYC United with both teams playing for the chance to be top of the table going into next weekend’s rounds

“The importance of this game was stressed at training and the ladies are committed to the club and to each other,” said coach Keith Perez.

“Standing behind this commitment and backed by the continued successful results, I expect the ladies to put in a strong performance. Come on out and support the Rocks!”