Kevin Grogan has received a timely boost ahead of the new season with confirmation that Jamie Clarke has committed to the Shamrocks for the pending Cosmopolitan Soccer League Division 1 campaign.

The Armagh GAA star is also a talented soccer player and recently won an AOH Cup title for his home soccer club in Crossmaglen. 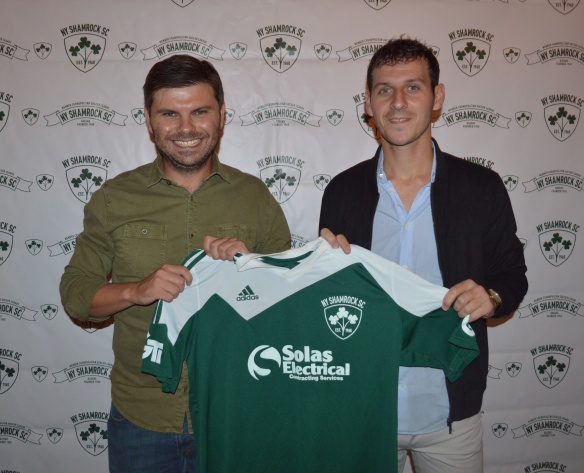 Clarke joins a half dozen impressive new signings as the Rocks gaffer bids to strengthen his squad for what is set to be another challenging but entertaining campaign, starting with the away trip to Zum Schneider on Sunday night (Randalls Island – Icahn Stadium at 8pm).

Grogan told NYShamrockSC.com that he was very impressed with the way Clarke has settled in with his new team mates.

“I’m delighted to sign Jamie,” added Grogan. “He is a quality person with a fantastic attitude. He will get better and better as the season progresses. It’s an exciting time for the first team.”

The 27-year-old is versatile and attack minded, able to play on either wing or up front and brings with him an eye for goal.

“I am very happy to link up with the Shamrocks and I’m looking forward to the season starting now,” said Clarke.

“I have enjoyed moving to New York and I was keen to find a soccer club that plays at a competitive level. It’s been a good experience training under Kevin and he offers great advice and coaching experience. We’re all focused on the first game now and ensuring that we can start off with a win.”