This feature about Over 30s coach Paddy Mc Carry was published in the July 20, 2016, issue of the Irish Echo.

Bring Jose Mourinho to this level and he may well have some stiff competition in Paddy Mc Carry. The Cosmopolitan Soccer League’s Over-30 division might be light years away from Europe’s elite set-ups, but pound for pound, Mc Carry is a sure bet to hold his own against any gaffer. 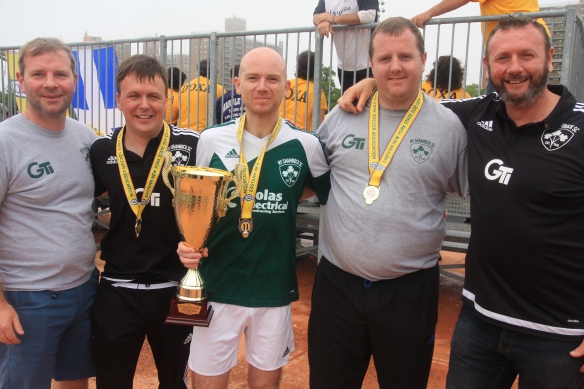 For now, though, the Stranorlar, Co. Donegal, man is stepping back to assistant coach to allow him to spend more time with his young family.

But talk about ending as coach on a high. He is coming off one of the most successful seasons by any manager in the history of the 1923-founded CSL.

Mc Carry’s Shamrock Over-30s went undefeated all season, clinching an historic league and cup double. Historic because it was the first time ever a CSL side had lifted the Fritz Marth Cup, the Eastern New York State Over-30 competition named for one of its illustrious administrators. 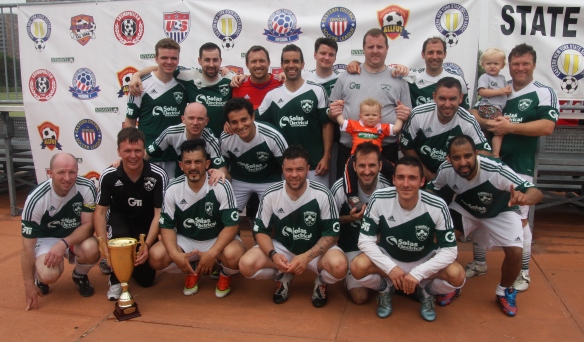 The victorious Shamrocks Over 30s celebrating their State Cup win back in June. Picture Eoin Sweeney

“My pride and joy,” hailed Mc Carry, in an Echo interview before his new role was announced.

The 37 year-old with a level 1 FAI coaching badge has been a magnet for success.

Prior to this season’s accomplishments, Mc Carry had won the Over-30 second division title in his first year as boss back in 2010 — unbeaten as well.

He went on to clinch two Eastern conference Over-30 titles and two first division championships. 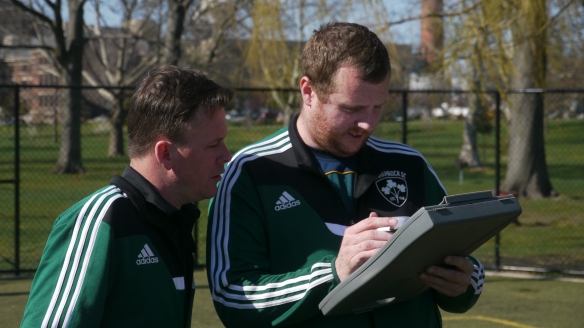 “Paddy is a great manager and with my help we’ve gotten the job done on and off the field,” said his assistant coach and Shamrock club president Sean Mc Mullan.

“We have had a strong Over-30 team now for the last three and four years since I came in to help Paddy after he won the second division. We went on to win the first division at our first try and we haven’t looked back since.”

Mc Carry concurred on the quality of his panels and how they’ve been key to his success.

“In all my teams I have been very lucky to have great players and when you win more good players want to join the team, and that has been the case,” he said. “But I am always looking for great players to push the ones I have.”

He also had kudos for Eoin Sweeney, his assistant in his debut coaching year, and Mc Mullan, an Armagh native. 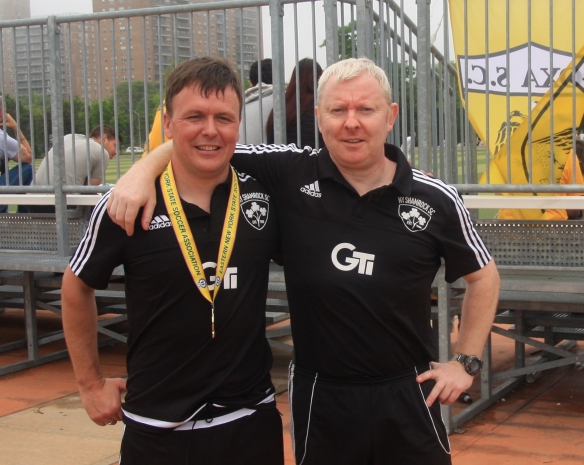 “I would not be anywhere if it was not for my two assistants that I have had since I took over,” said Mc Carry. “Eoin Sweeney in my first year in charge, and Sean Mc Mullan the last four years. I would always listen to them and they would tell me to try this and that and we would.”

Mc Carry is not averse to taking responsibility for minor setbacks the Rocks have experienced under his watch.

“We had one bad season after we won the first division for the first time,” he said. “I take total blame for that for not recruiting during that summer and we paid the price. We stayed up by the skin of our teeth. That has not happened since and will never happen again under my watch. I learned by the mistake.”

On his tactical secret to success, Mc Carry revealed: “I play a hard-working high-pressure game of football and it works.

“The first line of defense is my two strikers up top. They close the [opponents] back line down. I totally believe if you put teams under constant pressure and don’t let them play, it is very hard to lose.

“In all our winning seasons, we have been very strong up the middle, extremely strong.

“My wingers are always hard working and do a ton of running and my wing backs are very tough hard tackling defenders, very important because in most cases the opposition wingers want no part of them.

“If you don’t concede goals you can’t get beat, plain and simple, and I say it every game.”
And key to all this has been the Rocks’ pressing game up top.

“My two front men have always been great,” Mc Carry pointed out. “We have speed, which is very hard to handle in the Over-30 Division, and great skillful players. Usually, if they get a half a chance, it ends up in a goal.

“We hit 71 goals in the league this year. Bottom line, in my team, you must work extremely hard and always have your teammates back.”

The Rocks’ philosophy is universal.

“It’s always about the team,” Mc Carry pointed out. “We win together and lose together. It’s always our team. Everything we have won is down to the players they put the effort in every Sunday and they get the rewards.”

Chimed in Mc Mullan: “What makes me and Paddy so successful is that we work together and do everything together.

“We talk every day about what team we’re going to go with at the weekend, and if he can’t make it out to the game because he might have to look after [his baby son] for the day I am there to take the team. Also, we couldn’t do this without the hard work that our players put in for us on the field.”

As a player, Mc Carry turned out for his hometown Ballybofey United and Drumkeen United back in Ireland. He moved to New York in 2000 and picked up a couple of Long Island league reserve titles and a league cup medal before joining the Shamrock metro side in 2009.