On Saturday, the NY Shamrocks will honor three key figures from the club’s beginnings way back in 1960.

Former president Pat Rooney, former team manager Billy Barron and one of the greatest Shamrock players of that first decade, Paddy Rooney, were all pivotal characters as the fledgling organization moved quickly from a social outlet to a highly competitive soccer organization. 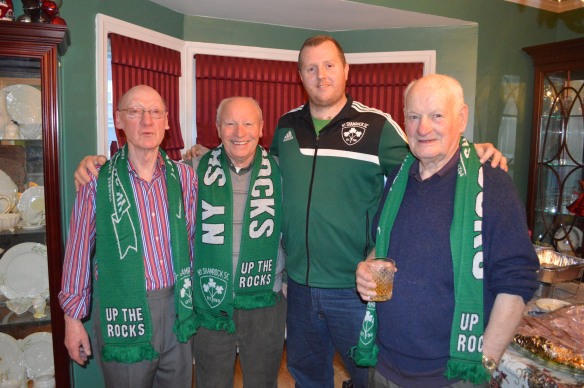 But thanks to these three and many other of their peers, the club never lost sight of its cultural role helping to build lasting friendships and vibrant families that flourish to this day.

Appropriately, these three great men will share the stage this weekend with a new generation of committed Rocks: league and cup winners who have delivered five trophies, six players of the year and seven top goalscorers during what has been an unforgettable and record-breaking season.

All three of our honorees represent what is great about building community in new cities and new countries while all three served in the US military, accentuating the incredible contributions they have each made to their families, their groups and their country throughout their lives.

Born in New York but raised in Dublin, Pat Rooney’s family history is a fascinating one – after moving back to the country of his birth, he was drafted, served his time and eventually forged a career in finance.

At the home of former president Pat Rooney are Shamrocks players John Riordan, Sinead Hennessy and Aoife West with two of the five trophies won this past season.

In 1960, Pat was introduced to legendary club founder John Kenny who immediately signed him up with the Shamrocks. While the Shamrocks matured as a team and began to attract better players, Pat made sure that the structure was right off the field. The Shamrocks became incorporated, wrote a constitution, laid out the by-laws and became a well-functioning club both on and off the field.

“Our manager at the time, Billy Barron, felt that we had out grown out of the EDSL,” recalls Pat. “So in April 1964, as president of the club, I wrote to the German American Football Association, iterating the growth potential and other laudable attributes which the Shamrocks would bring to their league.”

The bid was successful and the groundwork was laid for over 50 years of competition in what would soon become the Cosmopolitan Soccer League. 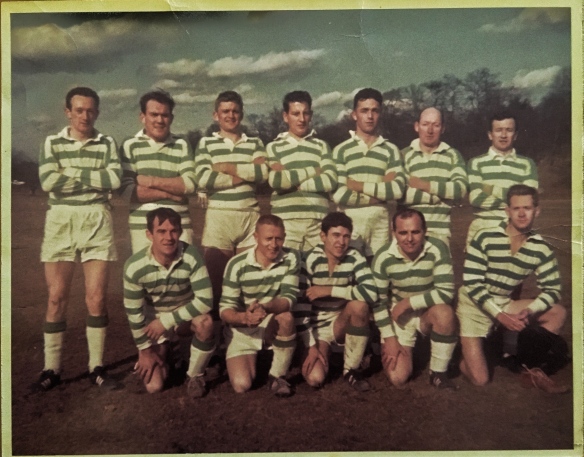 Pat Rooney was more involved in the board room than on the playing field but he represented the B team on occasion and is pictured here back row, second from right.

Outside of his soccer life, Pat was also an active theater actor and director – involved initially with the Thomas Davis Irish Players before becoming a founding member and director of the Cill Cais Players, a theatre group performing Irish plays in the New York area and beyond.

In 1971, Pat met his wife Sheila Dwyer (now deceased). Their two children Patrick and Jessica will attend on Saturday to support their father and Pat is also very proud of his two grandchildren, Catherine and Patrick J.

The other Rooney, Paddy, just turned the grand age of 80 this past week. A native of Dublin, Paddy immigrated to New York via Canada in 1957 at the age of 21, drafted to the US Army soon after he arrived.

Part of the 1966 double, Paddy Rooney is pictured front row, third from left.

After returning to New York in 1960, it just took a few minutes of a pick-up game in Central Park to convince fellow Dub Brian McKeever to ask Paddy to join a new team called the Shamrocks, In just his second season, Paddy inspired a league title win while scoring at least one goal in every game.

In 1963, on a plane trip back to New York after visiting his parents in Dublin, he was seated next to Mary McBride from Letterkenny, Co. Donegal, who was coming to NY for the first time to visit her sister in the Bronx. Six months later they were engaged and this August they will celebrate their 52nd wedding anniversary.

Paddy educated himself here in NY and became a master carpenter. In 1972 they made the move with their four children (Philip, Linda, Jimmy & Alan) out to Long Island. Paddy’s love for the game was passed on to his kids, who all grew up playing soccer, and Paddy coached his son Jimmy throughout his youth.

Paddy also continued to play in the local men’s recreational 30+ league and finally hung up his boots at the age of 60 – famously still playing after he had retired from his day job!

Jimmy, meanwhile, would go on to have ten successful years playing professional soccer in the MLS and is now an assistant coach at NASL club Jacksonville, alongside head coach and technical director Tony Meola, the former US Men’s National Team goalkeeper.

“The Shamrocks have always remained a part of my life,” says Paddy. “The men I met and played with became brothers to me, especially the Halpins, who are considered Uncles, Aunts and cousins to our children and ten grandchildren. It is a true family bond and they have been there for us through all the good times and bad times.”

This was especially true when sadly Paddy & Mary lost their first son Philip in 2007. Philip followed in his Dad’s footsteps and became a Carpenter working for NYC. He and his crew responded to the attacks on Sept. 11th and worked at the WTC site in the weeks and months that followed. As a result of this work, he contracted a rare leukemia and unfortunately lost the battle at age 41.

“The love and support of family and friends – true friendships that began way back in the early days of the Shamrocks – are the reason we have been able to endure such a devastating loss.

“I loved my time with the Shamrocks,” added Paddy. “So many aspects of that time have remained with me through the years!”

A native of Tipperary Town, Billy Barron immigrated to New York City via London in 1957 at the age of 23. A few months later he was drafted and served in the US Army for two years. While serving in Germany, he formed a football team comprised of US GIs who played against local German teams.

When he returned to New York he met John Kenny and in 1961, after John left NY, Billy stepped up to serve as team manager for the following six years.

“In the early sixties in New York City, young Irish men mostly emigrated from rural areas and didn’t play soccer, so we had to find Gaelic footballers and teach them how to play soccer,” recalls Billy.

“The players who grew up playing soccer came from Dublin, Cork, Limerick or garrison towns where the British Army were stationed. When Gaelic Park opened up in the spring it was a struggle to field a team to play soccer. Hard to believe, but that’s the way it was. We have come a long way.”

In 1969, Billy Barron left New York City and the Shamrocks, to move to his wife’s home of Lafayette, Louisiana. There, Billy coached a team for the University of Southwest Louisiana (the Rajun’ Cajuns) comprised of fellow students from Europe, the Middle East, Asia and Central America.

Since 1973, Billy and his wife Maureen have lived in Western New Jersey. They have three grown children (Danny, Sean and Kate) and two young grandchildren (Zhana and Liam). He has never lost his love for and involvement in the game of soccer. He has stayed heavily involved in the development of youth soccer in Central New Jersey as a player, coach, referee and fan.

After all of these years, he still follows the success of the Shamrocks from afar.

TO PURCHASE YOUR TICKETS TO SATURDAY’S END-OF-SEASON AWARDS BANQUET, HEAD TO http://shamrocks-banquet.eventbrite.com