The NY Shamrocks committee is pleased to announce that technical director and first team coach Kevin Grogan has committed to the club for the 2016/17 season. 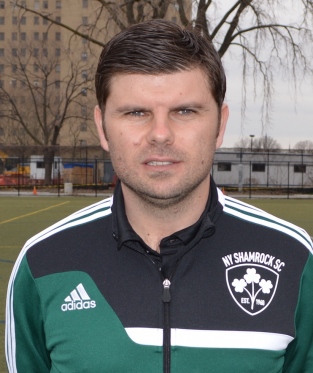 This is a timely boost for the Rocks on the week that Division 1 status was confirmed while there is also the significant matter of an exciting season finale on Sunday evening, the League Cup final against Zum Schneider at Randall’s Island Field 70 (kick off 5pm).

Grogan’s decision to stay on also offers an overwhelmingly positive endorsement of the progress of the club since the Dublin-born coach took on the role almost 11 months ago.

Under his tutelage, the Shamrocks first team secured survival in the top flight of the Cosmopolitan Soccer League after a ten-year absence, picking up 21 points and a sixth-place finish.

The rest of the club has also benefited from the added impetus of top flight soccer – the fifth trophy of the season was won this past Sunday by the Over 30s adding to successes for Rocks Women and Rocks 1960 and there is a possibility of a sixth cup if all goes well this weekend.

Grogan underlined the ongoing development of the first team while also outlining some ambitious club-wide plans including coaching clinics for kids with special needs and a support structure to develop coaches internally.

“It’s been an honor to be associated with the club. I feel my job here is only half done. As I have said before, we have built a young squad with an average age of 24. The squad will only get better with time and experience. I am already working on some new recruits to complement what we have and I feel some of the reserves have done well this season and deserve the opportunity also.

“I also have plans to implement some other initiatives at the club in the near future – for example, a ‘Soccer for All’ program for special needs kids, youth clinics, an NY Shamrocks TV channel and also some club wide coach educational podcasts/video tutorials.

“I want to thank the club president Sean Mc Mullan and all the board for their support and enthusiasm to drive the club forward in such a positive way. I would lastly like to congratulate all the coaches at the club for their success this year. I understand the mental torture you go through as coaches at times but you have all done a remarkable job. Keep working hard and keep using your imagination.”

Club President Sean Mc Mullan welcomed Kevin Grogan’s decision to recommit to the Rocks, pointing out that his contribution to the club as a whole was a vital factor in the growth and success which has been experienced over the past year.

“It has been a privilege working with Kevin and we were only too delighted to extend this relationship beyond the current contract,” said Mc Mullan.

“He has brought new blood into the club and all of these players have proven to be positive additions who have embraced the Rocks. He has also brought in fresh ideas and the other coaches have also benefited from his contributions. Each of our six teams have done themselves proud this season and the first team has the potential of being an even better representative of the Shamrocks at the top level of amateur soccer in New York.

“Kevin has big plans and he has always been very good at acknowledging the history of the club. He understood from day one what we were trying to achieve and he has been supportive in many ways that people may not be able to see. We look forward to next season now with renewed optimism.”