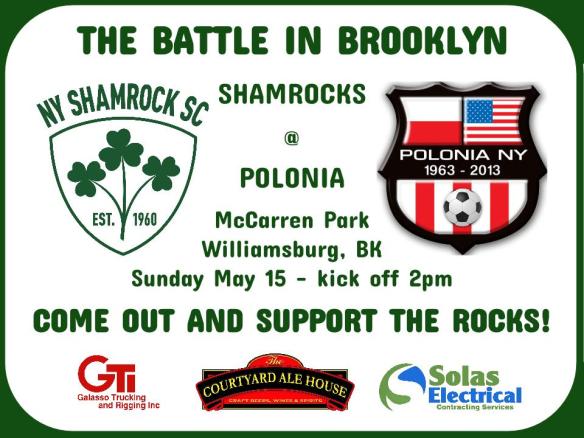 All eyes will be on McCarren Park in Williamsburg on Sunday where the Shamrocks are set to face a familiar foe with Division 1 survival the prize on offer.

Just over 12 months ago at the same venue, Polonia inflicted a heartbreaking 3-2 loss on the Rocks that would go on to hand the Division 2 title to the impressive Greenpoint outfit.

Now the two teams meet again, level on points and both desperate to scramble away from the third relegation spot.

In what is sure to be a barnstorming clash, the mission for the Rocks is simple: avoid losing and Division 1 status will be secured.

And given the tightness of the play-off race ahead of them, a win can actually keep alive hopes of finishing fourth, which would set up a possible semi-final against the top seeded team. 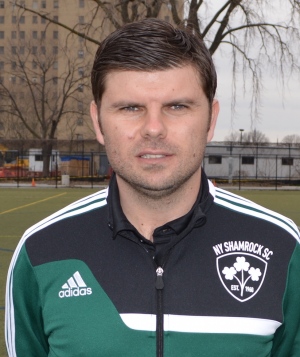 However coach Kevin Grogan is refusing to look that far ahead, underlining the primary ambition when he took on the job last summer: staying in the top flight of the Cosmopolitan Soccer League.

“We have given ourselves a great chance of achieving our season goal,” he said Thursday evening as the players gathered for their final practice before the big game.

“Now we need to deliver on Sunday. If we play with intensity and discipline and we concentrate, we can win this game.”

Chris Burns is unavailable for selection due to his honeymoon, Darren Freeman is suspended and Nick Zorbo continues to suffer concussion symptoms. Otherwise, Grogan’s squad is fully intact and will be boosted by the return of Micky McGreevy from suspension.

A surprising 5-2 win for Polonia last week against the weakened Greeks kept their season very much alive. The Shamrocks enjoyed a weekend off after four league losses against the best four sides in the division. 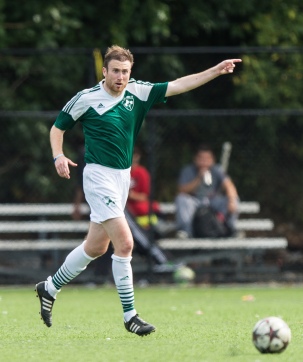 Meanwhile, Rocks captain Stuart Colbert called on all supporters to come out and make their voices heard in Williamsburg.

“We’ve worked very hard and we deserve to stay up,” said Colbert. “Having a good crowd of supporters there will really give us that extra edge.”

Stevie Doyle’s reserves are also chasing an important win which they need in order to stay in the hunt for a play-off spot. The Shamrocks’ second string have failed to win their last three games but can stay in fourth with a win and might even move up to sole control of third if Rovers fail to beat leaders NYAC.

“Without a doubt it’s our biggest game off the season,” said Doyle. “A win is important because it would set us up nicely for the playoffs. We need everyone on board. Our last performance was excellent and we had a never-say-die attitude which is what we will need Sunday.”

There will be a huge game at St Michael’s where Metro 2 East leaders Shamrocks 1960 have a must-win game in what is their final regular season match-up of the year.

Second-placed Gotham City have a game in hand and are just four points behind the Rocks while enjoying some impressive form. But a win against New York United will not only stave off the Gotham challenge, it will automatically secure promotion and Metro 2 championship final berth on June 5.

“We know if we play to our potential like we did against Eintract, we’ll get the result we need to lock up the division,” said player-assistant coach Neil Mannion. “But New York United will have their tales up after turning us over the last time so we won’t be getting carried away just yet.”

An early game at Randalls Island will see Banatul host the in-form Shamrocks Legends – the penultimate game of the Legends’ inaugural season.

“After coming off a really good win against Doxa last Sunday, this is a fixture we will be looking forward to,” said player-coach Emmett Harvey.

“With players back from injury, we have a full squad to choose from against Banatul. We have scored 13 goals in our last 3 games and if we play the way we are capable of we should pick up the three points.”

Elsewhere, the newly crowned New York Metropolitan Women’s League Division B champions will play their final league game of a historic season at St Michael’s on Sunday at 1pm. 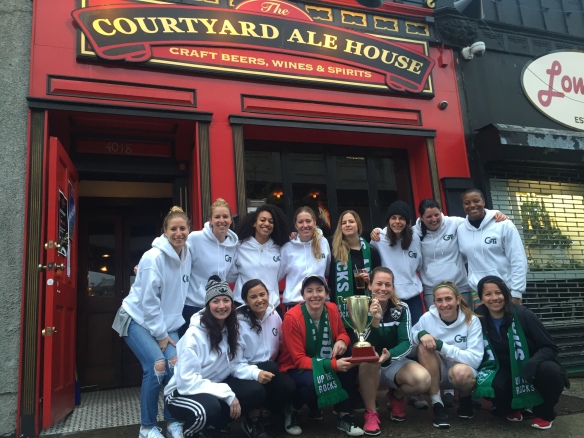 The champions can win their 13th league game in a row.

The Shamrocks women will welcome Manhattan Kickers to Queens in what will be a valuable opportunity to rotate the squad ahead of next Sunday’s League Cup final against Sirens.

Since their one and only league loss of this victorious campaign, a remarkable run of 12 straight wins has set the league alight and lucky 13 will set Paddy Geraghty’s charges up nicely for their last game of the season.

“It’ll be a chance for some players to claim a spot in the squad for next week’s cup final,” said Geraghty.

“We also welcome back Teresa Brink and Sarah Thorenton after long term injuries. They have worked very hard to get back to this point and everyone is delighted to see them return. Megan Hare also rejoins the squad after finishing her semester at school and it’s great to have another of our originals involved again.”

There will be no action for the Over 30s this weekend but Paddy Mc Carry and Sean Mc Mullan will be keeping a close eye on the sole remaining team with designs on toppling the title holders.

If Manhattan Kickers Premier beat second placed Central Park Rangers Grays at Randalls Island on Sunday morning, then the Rocks will be crowned champions. A draw will make it virtually impossible for CPR to end the season on top.