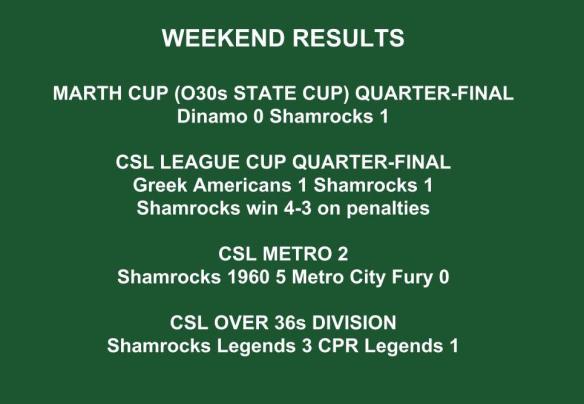 Four wins from four and two semi-finals reached on a perfect day for the Rocks!

The Over 30s moved on to the final four of the State Cup after a hard fought 1-0 win at Dinamo in Randalls Island. A dramatic winner from Paddy Geraghty with about two minutes to go kept Paddy Mc Carry’s double dream alive.

“I could not be prouder of my team tonight,” said Mc Carry.

“It was a very scrappy, hard hitting game against a very good side but our back four was absoutly brilliant. These boys deserve to be in the semi-final. They have been great all year.

“This is the first time in the history of our club that the Over 30s have gotten to the semi-finals of this competition and I’m so happy for the players and the club.”

There was more cup joy in the late game as the first team advanced to the League Cup semi-final with a penalty shoot out win over the Greek Americans at the Met Oval. 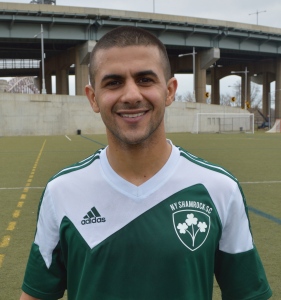 Mustafa Alobeidy had the Rocks deservedly one up at half-time, a brilliant and brave diving header at the front post after a Chris Uy cross.

However, the home side rallied and leveled the game in a what would prove to be tense second half.

Frankie Tsasse was the hero of the shootout, saving twice to ensure a 4-3 win.

“This was a great result against a quality Greek side,” said delighted Rocks boss Kevin Grogan.

“We played excellent football in the first half and showed real quality. In the second half we struggled to maintain that level but we showed great character to hang in there.

“But the focus is all about the next league game now. We’re at home to Pancyprians next week and we will be preparing for that this week.”

Earlier in the day, Shamrocks 1960 won 5-0 against Metro City Fury at St Michaels, their sixth clean sheet in a row in the league.

“It keeps us on the right track,” said coach Andy Connolly. “We’re delighted with the fact that we took our chances but to keep another clean sheet is a great tribute to our back four and our goalkeeper Robbie O’Neill.”

Meanwhile in the opening game at St Michaels, there was a superb 3-1 victory for the Legends against CPR thanks to goals from Tyrone Kent, Karol Hughes and Richie Brennan.

“We got the three points today but at times we struggled to put the game away while dominant,” said assistant coach Eoin Sweeney.

“Ultimately, for the team to get to the next level we need to cut out the silly errors. Overall we’re headed in the right direction.

“Richie Brennan was the stand out performer today, leading as captain and scoring a screamer from 25 yards. Johnny Keogh was also very influential in midfield. Overall it was a great win against a a very good CPR team.”