Club President Sean Mc Mullan and Treasurer John Riordan had the honor of attending the 25th annual Shamrocks mid-winter reunion at the home of Suzanne Mills in Malverne, Long island on Sunday afternoon.

Among the attendees were the club’s first ever president, Pat Rooney (Dublin), the club’s first manager, Bill Barron (Tipperary Town) and another great Dubliner, Pat Rooney, one of the legendary players from the original 1960 team which first took the field for the Shamrocks.

Pictured with current club president Sean Mc Mullan (the tall one) are, from left to right, the first ever Shamrocks president Pat Rooney, one of the first players from the original 1960 team, also Pat Rooney and the first ever team manager Bill Barron.

Mrs Mills has been dedicated to keeping these amazing people in touch every January in order to keep the memories of that first decade of the Shamrocks alive. We presented her with a Shamrocks pennant and a club scarf  as a small gesture of appreciation for her part in keeping this vital history alive and thriving.

Also in attendance was noted Rocks stalwart John McCrosson who connected the current committee with this lovely gathering and it was also a pleasure to meet with the Halpin brothers.

The Shamrocks is going from strength to strength but we are always mindful of the great people who got this club going almost 56 years ago when it was a lot tougher to organize something like this. 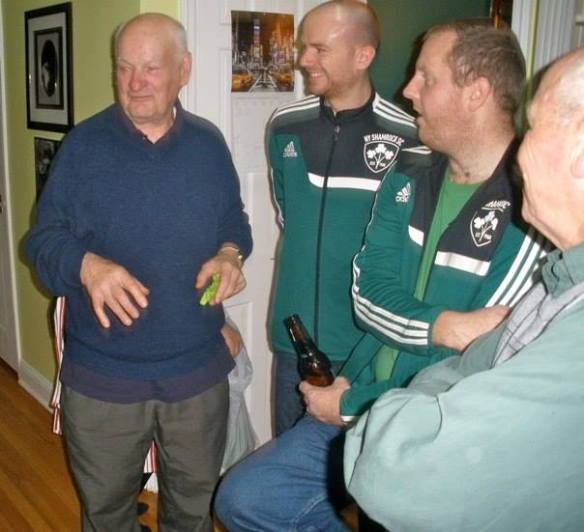 Billy Barron telling one of many great yarns from the early days.

We heard about their great games and successes, their amazing social calendar and their vital and thriving support network. The first home field was in Central Park but the rivalries with other teams was as strong then as it is now. We also learned about the 50th anniversary of the 1916 Rising which was marked by a game against a traveling Aer Lingus soccer team.

They were delighted to hear that the club is going strong again and we updated them fully on all six of our teams. We are looking forward to welcoming them to Queens in the spring when we will hopefully have a few trophies to challenge for.

Thanks again to Suzanne Mills for hosting and to all of the great people we met and who welcomed us with open arms. They are a vitally important part of our club and they provide us with more inspiration to keep growing but also staying true to the values they built the club upon back in 1960.

2 thoughts on “Reunion of Rocks!”