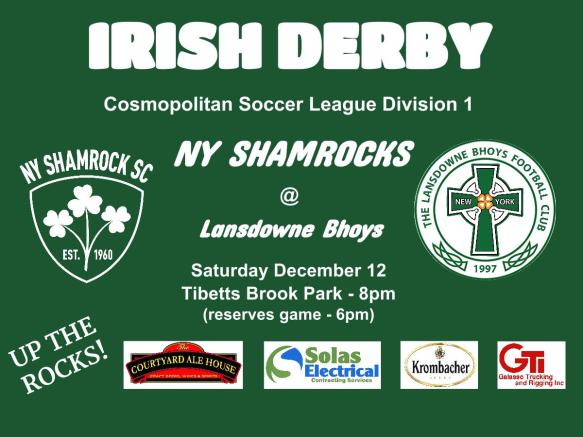 It will be Queens versus the Bronx in this weekend’s hotly anticipated Irish Derby – the first Shamrocks/Lansdowne game in over a decade.

Two-time Cosmopolitan Soccer League champions, the Lansdowne Bhoys, will host the Shamrocks at Tibbetts Brook Park on Saturday evening (8pm and 6pm) in what will be a return to the former stomping ground of Rocks coach Kevin Grogan.

Lansdowne are undefeated in the league but are coming into this one on the back of a Fricker Open Cup defeat to Westchester.

Shamrocks, meanwhile, will be looking to bounce back from their State Cup exit at the hands of Port Jefferson who advanced on penalties last Sunday, just a few days after being beaten 5-2 by Lansdowne in the Fricker Open Cup semi-final.

“It’s a great opportunity for our team to compete against the league champions,” Grogan told NYShamrockSC.com. “We are underdogs so there is no pressure on us. We don’t have any fear going into this game. It will be a good benchmark for our future.”

The curtain raising reserves game is all set to be a tight game with both teams locked in second position on 18 points after six wins and two losses.

“When we got promoted to division one this year, the first fixture we all looked at was this one,” said coach Stevie Doyle. “It will bring a lot for excitement to both teams. We have done very well so far with only two losses as have our opponents. We will be missing a few starters this weekend but we have had a strong squad all year and I’m expecting it to be close and intense.”

Meanwhile, Sunday will bring the curtain down on 2015 with three big games for the Rocks.

Most significantly, Paddy Mc Carry’s Over 30s can finish the year without a single league defeat.

They take on struggling Megas Alexandros at Randalls Island and will be hoping to maintain their six-point lead at the top of the league (Field 73 – 8am).

It will also be midfielder Danny Parkin’s last game for the club before he moves to Texas.

“It’s the last game of the first half of the season and we really want the three points to stay at the top of the league with a bit of breathing room,” said Mc Carry.

“Second play fourth this weekend so somebody will be dropping points. We just have to take care of our business.

“I have almost a full squad to choose from – we’re only missing two players. We have had a great first half of the season and we are almost perfect with eight wins and a draw. So three points is a must.

“It has been always about retaining our league title from day one and the players have been fantastic in their commitment all season. Sunday will be no different.”

League leading Rocks 1960 will take on Beyond FC Metro, the side they beat in the opening game of the season (Randalls Island 72 – 12pm).

Beyond managed a surprise 1-0 league win against AO Brooklyn last Sunday having not won since the beginning of December so the Rocks will be on their guard as they try to recover from last week’s tough penalties loss to Gottschee in the State Cup.

“This is the ideal way to bounce back,” said assistant coach Neil Mannion. “But we won’t be taking Beyond lightly because the win against them back in September was extremely hard fought.”

Elsewhere, the Legends face a tough task in Brooklyn where there they take on league leading Cozmoz (Bush Terminal Park – 2pm).

The Legends won at the same venue in their last game which was back before Thanksgiving and have strengthened since they lost to Cozmoz back in September.

“They are a talented team and we will need to be a little tighter at the back this time around,” said coach Emmett Harvey. “But we are looking forward to taking them on and we’d like to try and catch them off guard.”