It was a stunning way to round out the Fall segment of their league campaign before a return to cup games over the next two weekends. The Shamrocks will be divisional leaders going into the Spring and are also still going strong in two cup competitions. 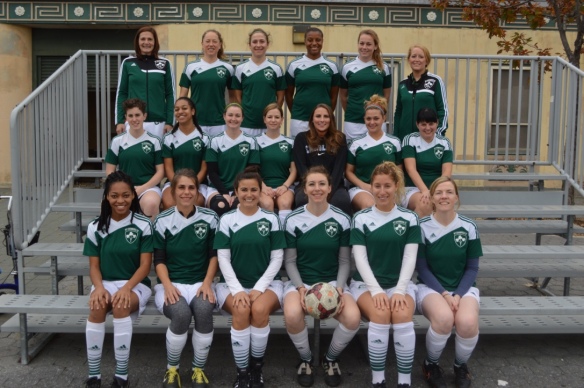 The Shamrocks Women’s team pictured prior to their 7-0 win over Manhattan Kickers.

This 7-0 win was their seventh success in a row in all competitions and it was inspired by a pair of hat tricks from midfield dynamo Teresa Ferraro (pictured below left) and the top scorer at the club, Sinead Hennessy (pictured below right) who now has 11 goals to her name. Jackie Pounder also got on the score sheet for the league leaders. 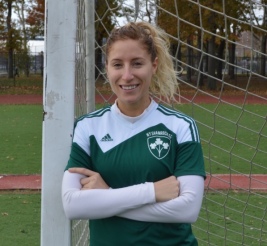 “We had a great performance against a good team,” said co-player/manager Tricia Reed. “We scored some excellent goals and we created a lot of chances too. It was a big bonus to keep a clean sheet as well. Perfect Sunday!”

Meanwhile, the Shamrocks Reserves were winning 5-0 against NYC Rovers at Brooklyn’s Bush Terminal Park when the under strength home side were further depleted by injuries, forcing the abandonment of the game at half-time.

Stevie Doyle’s men go joint top of the division now, level on points with Lansdowne who have a game in hand.

Shamrocks got off to a blistering start with a fine low drive from Isaac Hidalgo after five minutes. Darren Coleman made it two after ten minutes, continuing his impressive run of scoring this season. Mohamed Fofana added to the scoring with a penalty after fifteen minutes. Leo Nizzi made it four nil after twenty minutes and Paul McDaid finishes out the scoring with a tap in from five yards to add to his impressive brace last week.

“Very happy to have gotten a win today as we knew it was going to be a difficult game,” said coach Stevie Doyle. “We are looking forward to what is gonna be another tough game next week.” 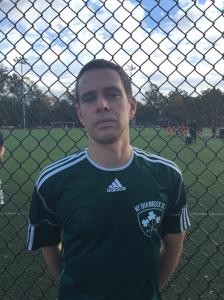 Braden Ruddy scored and had two assists for Rocks 1960.

In the first team game, Shamrocks will await the league arbiter’s decision for confirmation of the result after the game did not go ahead due to a situation not in our club’s control.

In Metro 2, Rocks 1960 won 3-1 against NY Finest at St Michael’s – goals coming from Ciaran Moloney, Hughie McGowan and Braden Ruddy who also had two assists. Kevin Farrell’s impressive performance was diminished slightly by an own goal just before full-time.

“This was easily our finest performance of the season,” said coach Andy Connolly. “The lads clicked and we played some incredible football. The only blemish was the failure to keep a clean sheet but that was unlucky and it arrived at the very end. Very happy overall”

Meanwhile, Paddy Mc Carry’s Over 30s champions and league leaders beat Guyana Veterans 4-1 in Randall’s Island in a tough tussle that ended with a valuable win for the Rocks.

Sean Riley’s hat trick included a second half penalty which all but saw off the potent Guyana threat while Tayfun Gokmen’s cracking long range goal just before half-time handed momentum back to the Rocks at a crucial point.

“It was a massive effort by all involved,” said Paddy Mc Carry. “We’re extremely happy with the three points. Guyana will beat a lot of teams in this league.”

Shamrocks Legends were unlucky in a 1-0 loss to SC Gjoa in the Over 36s division. On the bright side, their new set of jerseys sponsored by Joe Connolly and Solas Electrical were unveiled and worn for the first time. Thank you Joe for your support! 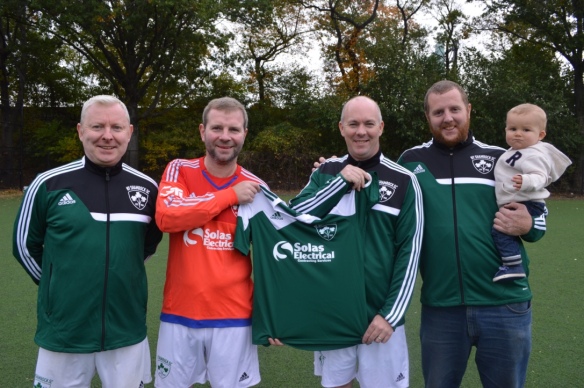