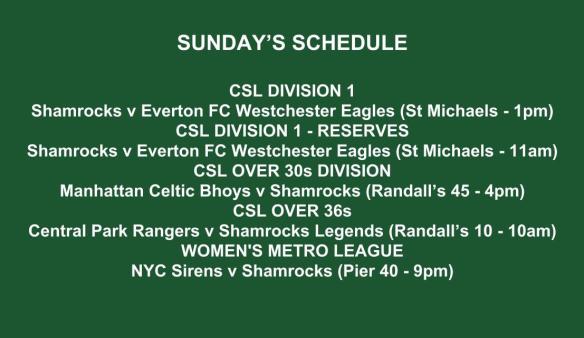 Both teams dropped points for the first time last weekend ensuring a tie in second place along with champions Lansdowne Bhoys who are also on two wins and a draw.

Westchester have only conceded once – last week’s 1-1 draw away to NYC Rovers – while September brought wins over NY Athletic Club and Central Park Rangers Whites. 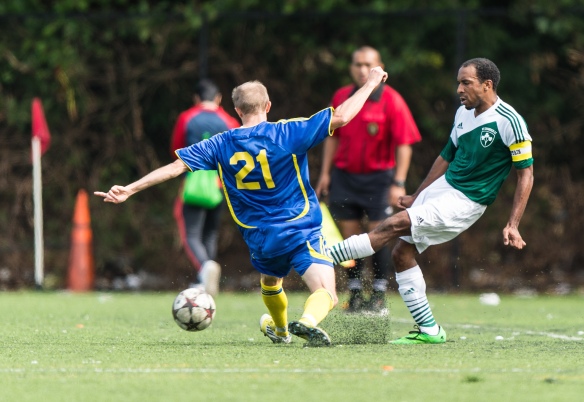 Chris Burns will return this weekend for the first team. Picture: Dennis Schneider

“It’s the toughest game of the season against a team that are in the top three in the league and are title contenders,” said coach Kevin Grogan. “One of their players Bljedi Bardic has been training with NYCFC’s first team so that’s the level we will have to deal with.

“They wont like playing us though, nobody will. We are an honest team finding our feet in this extremely hard league.”

Key players Laurie Child (illness) and Chris Burns (away) both make welcome returns to action while Uruguayan playmaker Santiago Rigby is also back after injury.

Grogan also reacted to the big news that long time rivals from the Long Island League, the Irish Rovers, would be the visitors for next week’s State Cup Round One.

“It’s a pay-per-view cup tie!” said Grogan. “There is a lot of history between the clubs. Ultimately our focus is on the league but it will be a nice chance for us to rotate our squad and try to compete against a good Irish Rovers team.”

Reserves coach Stevie Doyle will be leaving nothing to chance against winless Westchester, meanwhile, and will be boosted by the return of captain Shane Moore (kick-off 11am).

The reserves have won three from three, joint top of the division with NY Athletic Club and Lansdowne Bhoys.

With Shamrocks 1960 on a bye weekend due to the withdrawal of Grenadier Zenith, there are only five games this weekend. 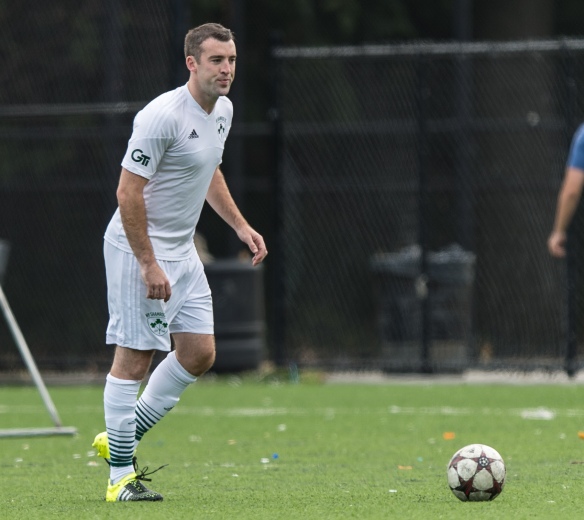 Rob Gaynor has been solid at the back for the reserves who have kept two clean sheets in a row. Picture: Dennis Schneider

“It’s a really tough fixture even though we have gotten off to a good start,” said Doyle. “We have very a tight defense marshaled by Rob Gaynor and the goalscoring from Darren Coleman has been key but we have to remain focused on the game in hand. We also have couple of injuries leading up to the game but we will be pleased to have Shane back in the fold.”

But Paddy Mc Carry will be taking nothing for granted Sunday, aiming for nothing short of three points before teams head into State Cup action. (The Over 30s will travel to LISFL champions NY Polet – location and time to be decided)

“I’m expecting another tough game against Celtic,” said Mc Carry. “It’s an Irish derby and they will have some very good players and will want to win it. I have a strong panel for Sunday so we are in good shape. It’s all about the three points. I want to be top of the league going into our State Cup game.”

Having won their first game of the season last weekend in fine style, the Legends will hope to make it two from two in October when they take on Central Park Rangers at Randall’s Island 10 on Sunday morning (kick-off 10am).

“We’re looking forward to this won,” said assistant coach Donal ‘Ducky’ Kelly. “We beat CPR in our first pre-season friendly but they are vastly improved. They are top of the table with four wins so we have to be aiming to compete and we won’t be looking past them.”

Meanwhile in the Women’s Metro League, the Shamrocks face a daunting task against league leaders NYC Sirens who are point ahead of the Rocks in Division B.

It’s a late kick off for the team with three wins in a row, the game starting at 9pm in Pier 40. But co-player/manager Erin Cullen is looking forward to bringing their best squad yet into action after two more additions this week.

“We are excited to see how all of our strongest players work together on the pitch for the first time,” said Cullen.

“We are without our starting goalie Jessica Kambic this week, so we’ll be working to dominate possession for the entirety of the game.”