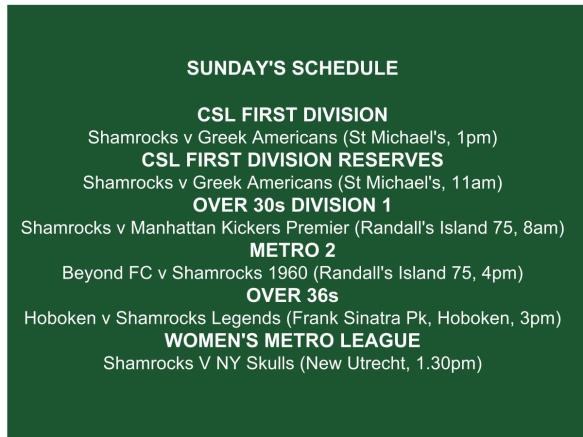 Midfield dynamo Sean Steed has been named as NY Shamrocks club captain ahead of the hotly anticipated return to the first division of the Cosmopolitan Soccer League.

Steed (pictured) said he was honored to be chosen by Kevin Grogan and was looking forward to the challenge ahead.

“All the players are ready after a very good pre-season,” Steed told NYShamrocksSC.com.

“We are looking forward to testing ourselves against very strong opposition and it doesn’t get much more difficult than facing the Greek Americans.”

Grogan also confirmed that newly signed defender Lee Toland will serve as vice-captain. Born in Derry, Toland is a former Newcastle United and Derry City player and has settled in extremely well since joining the club in July.

Grogan has been hard at work recruiting in new players with the likes of Sean Reilly, Laurie Child, Chuong Tran and Anthony Tagliaferri adding quality to the side while Brazilian Rafael Carpes will add much needed steel to the midfield.

But the head coach has also been keen to retain the players who got the Shamrocks promoted with last season’s top scorer Mohamed Fofana expected to lead the line again while the talented midfield trio of Michael McGreevy, Sean Doran and Santiago Rigby will be looking to avail of the higher standard of soccer.

“We are underdogs this season but we are giving ourselves the best chance possible to achieve success,” Grogan told NYShamrockSC.com.

“We have worked hard now for five weeks training, recruiting and playing five pre-season games. We have a good mix of new players and players from last year.

“The Greeks are one of the biggest clubs in the league so its a tough start but we will function and compete. Every game is a cup final for us. If we win a game we cant get carried away and if we lose we must move forward and bounce back. Every point will count.

“John Kenny obviously had a vison and founded the club in 1960. Here we are in 2015. It’s an amazing history. I’m honored to be involved and I fully understand the responsibility attached to my role in the club.”

Stevie Doyle will once again coach the reserves and has named Shane Moore as his skipper ahead of Sunday’s 11am kick off.

His side will be backboned by club stalwarts such as Nikle Guzijan, Mitch Jones, Brendan Lane and Paul McDaid while some of last year’s more impressive players were rewarded with a shot at the first division with keeper and player of the year Nick Meola joining Cathal Monaghan and Daniel Cano in the squad.

“I am very excited to get going this Sunday,” said Doyle. It has to be described as another great chapter in Shamrocks folklore.

“Players have been working extremely hard in preseason and we can’t wait to get started and get going. It’s a top quality league and with a squad of old players and new players this year, we will be hoping to turn a few heads this year.”

“It won’t be an easy way to get going,” admitted Mc Carry, “but we have retained a lot of our squad and we have added some good new players. We’ll be the ones every other team wants to beat so we will be ready for that.”

It will be a big day for the new teams at the club, meanwhile, with Shamrocks Legends and Shamrocks 1960 lining out for their first league games.

The Legends, led by coaches Emmett Harvey, Donal ‘Ducky’ Kelly and Eoin Sweeney will be at Hoboken at 3pm on Sunday. Randall Friedman returns to the club as captain with Kelly named as his vice-captain.

Dave Harvey will captain the 1960 team which will be coached by Andy Connolly, Neil Mannion and Colly Madden while Ruairi Lavery is named as vice-captain.

In the Women’s Metro League, the Rocks Women will take on NY Skulls in New Utrecht at 1.30pm with some impressive new additions.

“The roster is quite different from last year in that we have nearly 10 new players joining the team, as well as some very strong players returning from last season. We’ve been practicing throughout the summer and we’re hoping that this new lineup will present a stronger team dynamic on the pitch.”