The New York Shamrocks Soccer Club AGM was held in the Courtyard Ale House in Sunnyside on Sunday.

With trophies on display and four players of the year being honored for their performances this season, the mood was celebratory but there was also a determination to expand on this season’s success. 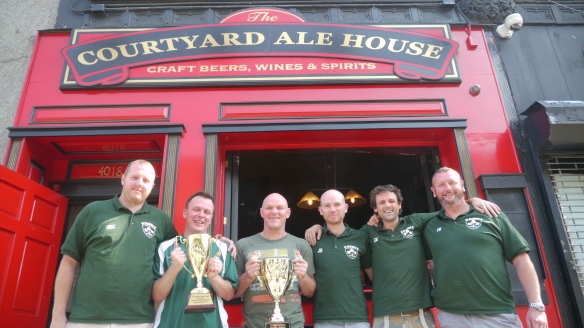 Promotion to the first division of the Cosmopolitan Soccer League will be a major challenge for the club but one that must be embraced after a ten-year absence, pointed out club president Sean Mc Mullan who was unanimously re-elected for a third successive season.

Outgoing first team coach Glen Wrafter paid tribute to the hard work done all season beginning with a highly successful Sunnyside Gardens six-aside tournament back in August which was won by the Shamrocks Alumni.

Fundraising was a success thanks to the hard work of committee members and the energy of the Shamrocks membership and the club will be looking to build on that with its third annual golf outing in September.

Sponsorship was also increased thanks to the continued support of GTI Trucking, the Courtyard Ale House and Radeberger as well as the addtion of Crana Electric, New Wave and Andrew James Interiors. Special thanks was given to long time Shamrock Johner Guildea who personally contributed to expenses associated with referee payments.

The highlights of the year were of course the first team securing promotion to CSL Division I while the reserves were joint top of their division, missing out on head-to-head but garnering some measure of consolation via their Saunders Cup victory.

The Over 30s won the CSL Division I – Paddy McCarry’s second league title in three seasons.

“Paddy set the blueprint for the club in 2012 with the other teams drawing from his success,” said Wrafter. “To repeat that success three seasons later is a fantastic achievement.”

One of the amazing achievements of the year, however, was the addition of a women’s team whose Inaugural season was completed with good results coming towards the end of the season which should bode well for next season.

The Shamrocks committee was unanimously re-elected with numbers bolstered by new additions.