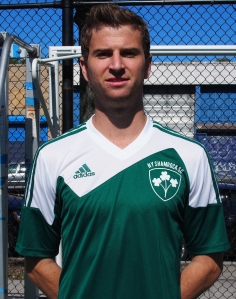 Joey Aronovsky was the hat trick hero in Flushing on Sunday.

The NY Shamrocks stay top of Division 2 after their final game of the Fall ended in a deserved 6-3 victory at NYPD in Flushing.

The Rocks were well on top in the first half and were rewarded after 23 minutes when an excellent Aronovsky strike from the left struck the far corner of the NYPD net.

Top scorer Mohamed Fofana struck the third from the edge of the box after 35 minutes but NYPD narrowed the gap to two again with a well taken goal four minutes later.

Just before half time, Mike Stone made it 4-1 with another long range shot that went low past the keeper.

The second half started with a bang with goals from Fofana and Aronovsky in the 46th and 48th minutes sandwiching an NYPD strike in the 47th minute.

That made it 6-2 and the police then scored again with a half hour to go.

A scrappy final period went scoreless and the Rocks saw it out to win 6-3.

Earlier it was a 2-2 draw in the curtain raiser, keeping the Rocks reserves clear at the top of the league.

The away side was behind twice in the first half but goals from Colum McComish (pictured) – his first for the club – and a long range second half screamer from Kevin Farrell ensured a decent away point for Stevie Doyle’s men. 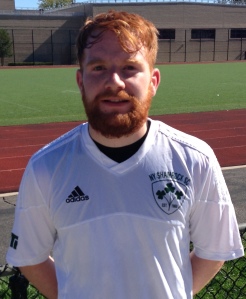 A missed penalty from Sean Hand could have made it 2-2 before Farrell drew the Rocks level.

One make-up game remains for the reserves, Sporting Astoria will host the Rocks on December 7 in the Bronx.

The Over 30s rounded out their Fall season with an unlucky 2-2 draw at home to Manhattan Kickers.

Sean Riley bagged another brace, scoring in the 15th and 70th minutes but a cruel equalizer in the dying moments denied Paddy Mc Carry a deserved win before the winter break.

An early blow saw Ruairi Lavery leave the game with a suspected broken collar bone and the club wishes him well for his recovery.

Meanwhile, in a late game in Brooklyn, the Rocks women were unlucky to lose 2-0 against NYC United.