Weekend scores from the Cosmopolitan Soccer League and the Metropolitan Women’s Soccer League
Man of the match Santiago Rigby was the major difference between the teams at St Michael’s on Sundayafternoon as Glen Wrafter’s first team got back to winning ways with a 4-3 win over Manhattan Kickers.

Wrafter opted to start Nikle Guzijan as a striker and he made good on his promise to deliver by opening the scoring with a header from short distance after 10 mins.
Kickers, who came down from the First Division this year, equalized soon after to make it 1-1 and then took the lead with a penalty after 15 mins.
Newly signed Rocks midfielder Sean Doran made it 2-2 after 25 mins with a fine finish from just inside the box and then captain Sean Steed made it 3 – 2 with another fine header from short range.
Rigby then secured the points before half-time, making it 4-2 with a wonderful finish. 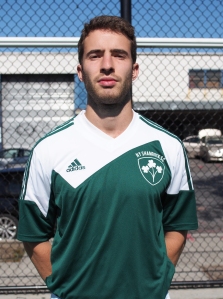 A mix up between Rocks’ goalkeeper James ‘Scouse’ Wright and Guzijan allowed Kickers a third early in the second half but the Rocks held on for the win.
The Rocks are now second as they face into a crucial game at league leaders Doxa next Sunday (kick off2pm at Van Buren High School).
Meanwhile, Stevie Doyle’s reserves are three points clear at the top thanks to a stunning 9-0 victory in the curtain raiser.
A Sean Hand hat-trick was just part of his man of the match performance, driving almost every attack from his midfield berth and proving once again why he is the biggest signing of the off-season. 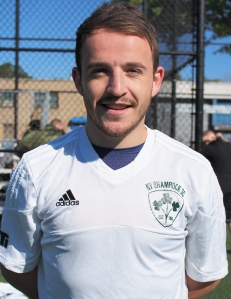 Leandro Fregossi was impressive again, recording a brace of goals while sub Jim Wong scored two quick goals after being introduced on the hour mark.
Striker Paul McDaid and midfielder Anthony Carrabotta both got one each to go with their own great displays.
Earlier Sunday morning, Paddy Mc Carry’s dominant Over 30s continued their excellent start to the season with a 1-0 win over CPR Grays.
Alex Berne was on the mark once again, ensuring the Rocks are now three points clear at the top with a game in hand.
In the late evening game, the Women’s team were defeated 3-0 in College Point by Baby Magic.